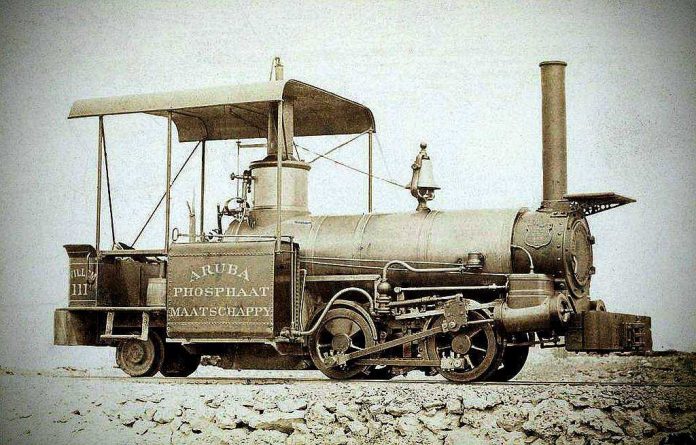 In the 19th century another natural product, besides gold, was found to be fit for exploitation. On Seroe Colorado, at the utmost south-easterly tip of the island, guano was found. This limestone, containing phosphoric acid, originates from bird droppings, in this case seagulls. There was a broad world market for phosphate that was used as a fertilizer.

The discovery of guano is being credited to J. H. Waters Gravenhorst in 1874, but it seems that in 1859 already an American, S. R. Kimball, who was digging guano on the Aves islands, had applied for a permit for exploitation. If it actually has come to that, remains unknown.

In 1871, guano had also been discovered on Klein Curaçao by the Englishman John Godden. His discovery caused quite a hype on de Antillian islands, a kind of ‘guano mania’. On Curaçao too, guano was found and exploited by Godden.The phosphate was very conspicuous by its color: yellow to red-brown or the color of liver, sometimes green or purple. That’s how Seroe Colorado (the Colored Hill) got its name.

After the discovery of guano on Aruba by Gravenhorst, exploitation was started by the Aruba Phosphaat Maatschappij (APM), founded in December of 1879. The center of exportation was San Nicolas, which only consisted of a few fishermen’s huts before. The activities surrounding the exploitation and exportation of phosphate led to more and more huts being built there. It already started to look quite like a little village, where sailors from the ships that came for the phosphate came looking for distraction ashore. Local labor was initially only found with difficulty: that was because of the rival branch of industry, the exploitation of gold. That’s why forty men were attracted from Bonaire and about twenty bricklayers and carpenters from Curaçao. Even a group of Italians was attracted to the island to manage the company; four of them never left the island: Antonio and Victorio Petrocci, Eugenio Falconi and Cajetano Jacopucci. They settled at Tanki Leendert.

The exploitation of phosphate led to the development of the settlement of Sint Nicolaas. First a wooden pier was built in the harbor and the phosphate was taken there by donkey.  In 1881, new material arrived from England and New York. The installations that were built then were ultramodern for that time. In the Sint Nicolaasbay, an iron landing was built and that was the most modern harbor facility in the whole Caribbean at that time. For the transport of the phosphate to the harbor, a six kilometer long narrow gauge railway was built and the phosphate was taken to the loading berth in trains of about twenty tip carts and a steam locomotive. There it was loaded into sail ships that took it to countries like England, France, Germany and the United States to be processed to super phosphate that was used as fertilizer. The phosphate company had its own tugboat (the ‘S.S. Phosphate’) and its own pilot to get the ships safely in and out of the Sint Nicolaasbay. The time that was needed to load a ship was being reduced from 15 to 5 days. Three- to five hundred tons of phosphate per day could be handled by the pier. In 1882, about 250 men worked in the phosphate industry and the salaries were not bad. People came from all over the island to work in the phosphate mines; those who lived in the surroundings of Noord, had to get on their way by foot or on a donkey by Sunday afternoon, stayed overnight  in Savaneta to start working on Monday.  The workers stayed near the phosphate mines all week and slept in barracks. On Saturdays, they worked half day, after which they set out to return home on foot or on a donkey……

Business went well and soon a profit was made which allowed paying off the loans that were made for the investments. A dividend could be paid out as well.

Initially, phosphate was extracted on Seroe Colorado and Seroe Culebra. When the supply at the surface of the hills was exhausted after about fifteen years, they went on to look for phosphate deeper in the ground. On a depth of 15 to 18 meters, phosphate layers, six feet thick on average, were discovered at Banki Jerome, a bit more to the north. Mines were made to bring up the material. Those provided enough phosphate for the next 15 years. Holes were drilled by hand into the phosphate and then it was extracted with explosives.

The exploitation of the phosphate caused the revenues of the island to rise considerably and that made it possible to support the other islands of the colony Curaçao (the Netherlands Antilles did not yet exist) as well. In the years of exploitation (that went on till 1914), 530.060 tons were exported with a total market value of almost 17 million guilders. Aruba could generate about 4 million guilders from exportation taxes.

But in the course of the years, phosphate exploitation became less profitable: as the phosphate had to be extracted from deeper underground, the quality became poorer. Furthermore, there was strong competition from good quality phosphate from Canada. Good and relatively cheap phosphate came out of Florida as well and as a result, the global prices went down. The APM found out that the expenses to exploit phosphate were too high to be able to still be competitive. Even though the tax rates had been reduced by the government, the profits continued to go down and finally the expenses could not be covered anymore.

When World War I broke out in 1914, the exploitation of phosphate became very difficult. It was impossible to get dynamite and the means of exportation became worse as a result of the war in Europe. The Aruba Phosphaat Maatschappij closed down in August of 1914 and a year later, the company was dissolved by its shareholders. Workers left again and went looking for work in the surrounding countries like Venezuela and Colombia. Source: www.historiadiaruba.aw.

The STEM Embassy, an organization of young people promoting the learning...