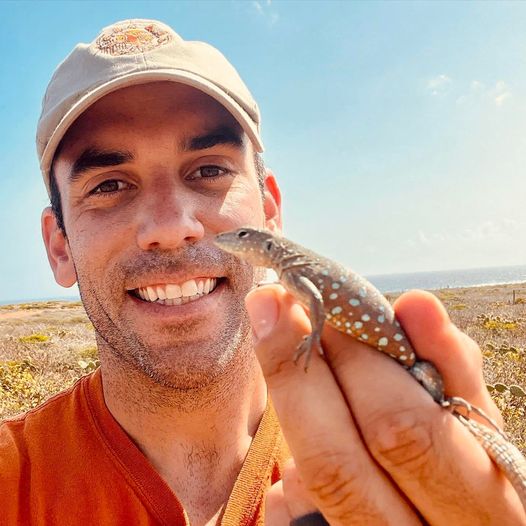 Meet herpetologist, researcher and our friend Dr. Jeff Goessling, who has been studying the Aruba whiptail lizard (Cnemidophorus arubensis), known locally as Cododo.

Jeff marked the female Cododo in this image on 2 July 2019, and she is so far the longest-living marked lizard Jeff has recaptured out of hundreds having been marked. When Jeff first started PIT tagging Cododos in 2017, he really had no idea about their life history strategy.

Would they live years, decades, or even longer? Jeff’s research has been uncovering some mysteries: Cododos reach maturity by about 1 year of age, many live into their 2nd year to reproduce, and very few live past their 3rd birthday – which is surprisingly short when compared to other desert species in, for example, the USA. Male Cododos seem to have one bright blue year during which they get eaten by somebody bigger (bird or snake).

Jeff states that he is only just scratching the natural history surface on this fascinating lizard. The charismatic Cododo are largely herbivorous and are themselves fascinated by people (they frequently wander into Jeff’s backpack or car to check out his equipment), and make eye contact and then ‘hand-wave’ to signal they see you.

Cododos are ecologically critical in Aruba as they are the main prey base for the endemic Aruba Island Rattlesnake or Cascabel (Crotalus unicolor) and several native birds, including Shoco and Warawara.

The MooMba Beach Spring Break Bash is ON!