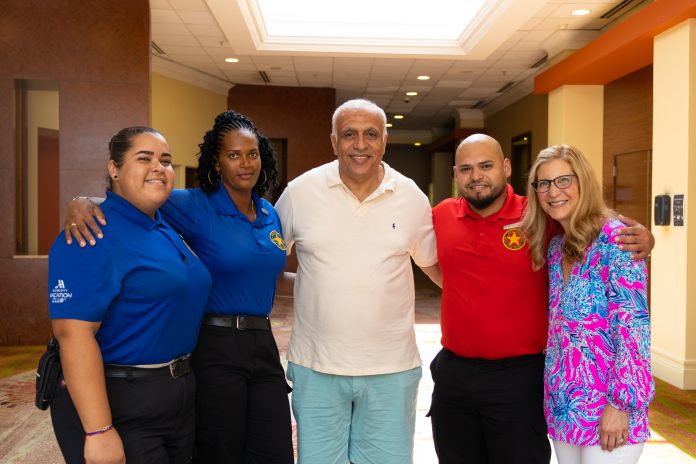 Training, teamwork and courage were the formula that helped save the life of a guest on Tuesday night, the 23rd of March, when a guest had a stroke and did not have any pulse.

2 associates of the department of Loss Prevention of Aruba Marriott Resort reacted immediately to help save the life of this guest while the ambulance was on its way to the hotel.

At about 23:58 on the 23rd of March, the security office received an emergency phone call to tend to a guest who was in his room with no pulse. Immediately the two associates of Loss Prevention, Antonio Ras who is Loss Prevention Supervisor and Loss Prevention Officer Tisha Powell went to the room to offer their assistance. They started with CPR immediately and while they were performing the CPR, they followed the instructions of the Automated Externel Defibrillater (AED), which was to give shock to the guest. After getting to a weak pulse, they kept trying and after a few tries, they were able to get a stronger pulse, which was held stable until the team of paramedics and ambulance arrived to the scene and took the guest to the hospital.

“All members of the team of Loss Prevention has training and certification in CPR, the use of the AED machine and other emergency procedures, and practice these skills regularly in order to be prepared at all and any given time,” Ruthline Theysen, Complex Director of Human Resources expressed, adding that “we are extremely proud and thankful to our heroes Antonio Ras and Tisha Powell, who acted immediately and applied all that they have learned with courage and a strong teamwork. We thank them heartily on behalf of management and all employees from Aruba Marriott for their heroic act that is surely an inspiration.”

The guest has recovered and together with their partner expressed gratitude to Antonio, Tisha and the team of Aruba Marriott Resort with a lot of emotion and happiness to be alive, as well as an immense gratitude to have received another chance to be alive.

Aruba Marriott nominated Antonio Ras and Tisha Powell to receive one of the most prestigious recognitions of Marriott International, “The Chairman’s Award”, which is to honor the Marriott associates around the world who saved a life.

“Aruba is the Best!”