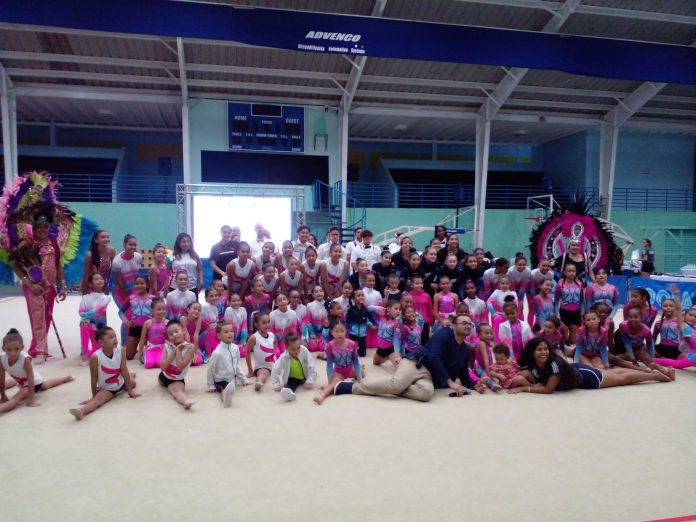 Last Thursday took place the opening of the Aruba International Rhythmic Gymnastics competition organized by local sports club Perla Gymnastics Aruba. During two days of competition, clubs from different countries took part in the events for each category and level of rhythmic gymnastics.

Adriana Sevilla, coach and founder of Perla Gymnastics Aruba told our reporter that the event in its totality went really well. “The event was beautiful. We had some technical problems, like delays because some organizations didn’t have their forms in order. But everything went well, no child was injured, all the children were happy and all received a medal.”

Sevilla explains that the preparation, not only of the athletes but also the organizations taking part in the competition, began since the start of the year. Last March, Perla Gymnastics moved to their new location where for the first time the children can train on a competition mat for gymnastics, which according to Sevilla, makes the children more confident in themselves.

“They improved because they know the space. We took many months also to train in the gym itself, to prepare the body sufficiently, and the last three weeks we trained six days per week for three hours each day. The preparation was hard to reach our goal, which was to take part in the competition and have a good performance for the club and for Aruba”, she said.

Regarding next year, Sevilla says that there are different international rhythmic gymnastics competitions scheduled, among other places, in Mexico, the US, Paraguay and Venezuela, and Perla Gymnastics is invited to take part. “The next step is to sit together with the parents, as they are the main support for all this. I give them ideas, I prepare the children, but in the economic aspect, they are the ones supporting their kids.”

Aruban minister of Education and Sport, Mr. Endy Croes was present during the official opening of the Aruba Internacional Cup Rhythmic Gymnastics Competition. Croes told our reporter that as minister of Sport, he supports sports in its entirety. “When we see the children with happy faces that they enjoy the sport, it fills us with great joy”, he said.

He commented that, regarding the financial support, this falls under Lotto pa Deporter and Stichting Subsidie Aruba that gives the financial support. But as Minister of Sport, he is glad that sport is getting international recognition. “And for this sport, they can also count with our support”, he said.

Perla Gymnastics representing Aruba won different medals in different categories and levels during the competition. Coach Sevilla expressed that she is beyond happy with the performance of her athletes, and she hopes that next year they can have many more athletes taking part in the Aruba Internacional Cup Rhythmic Gymnastics Competition.

Our reporter also spoke with some of the coaches of the different countries. Coach of the Dominican Republic, Mariam Parra explained that their preparation process was difficult because in their country, the sport of rhythmic gymnastics is not very popular, and for this reason it is not easy to find the adequate space for training. However, despite the difficulties she is happy with her team’s performance.

“Six kids came to compete and I am very happy that all of them received a medal and also went up the podium of the top three during the competition. The competition was very well organized and Aruba is a beautiful island and its people treated us very well at every moment”, Parra commented.

Coach of Club Panteras from Bolivia explained that they had 12 athletes total in different categories and levels, and the results were better than they expected. “Our kids shone in all the levels and we are very happy with the results also. It’s the first time we are competing in a cup in the Caribbean and we are really happy that we came and the kids really enjoyed the island”, they said.

Claudia Torres Cruz, coach of Oro de Mexico club from Mexico, said that the experience was beautiful because the athletes who came to compete are currently entering the world of international competition, and they enjoyed the experience as a whole. “The main objective was for them to enjoy and support each other. The kids are super happy. It is the first time we come to Aruba and we fell in love with the island. Everyone is very kind and we liked how everyone treated us everywhere”, Torres Cruz indicated.