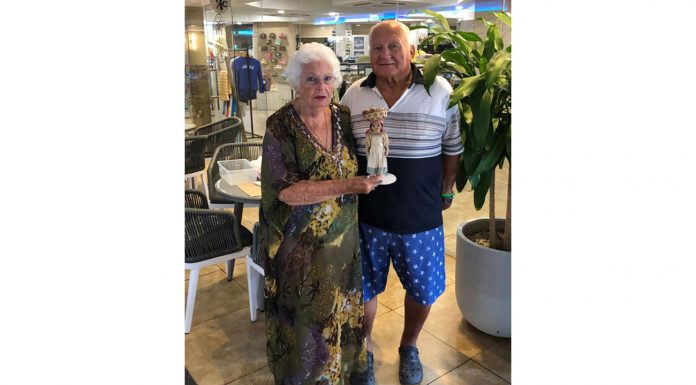 National Archeological Museum of Aruba, MANA received a fabric doll about 80 years old, from Mrs. Dolores Rutski. Back when Dolores, a resident of New Jersey was about three or four years old, she received the doll as a gift from her uncle, who brought it from Aruba.

The doll has some details, like a traditional handkerchief tied on her head. Dolores doesn’t remember every playing with the doll, she kept it and would only admire it.

Mrs. Rutski visited our beautiful island herself for the first time in 1973, to celebrate her honeymoon. She kept visiting Aruba for many years. She said that her uncle, Vincent Citarella was a marine on board of the commercial boat US Merchants during the Second World War. One of them was attacked by the enemy, causing the boat to sink. Only Citarella and one other marine survived the attack.

It was during her stay in Aruba last year that Dolores realized that Aruba was also involved in the Second World War. She realized then the connection between her uncle, the doll, Aruba and the Second World War. Then she promised to come back with the doll and take a picture together in Aruba.
Dolores also began thinking about how, when she passes away, the doll will no longer have a home. In order to guarantee a home for her, could she gift the doll to a museum? This way she could visit the doll when she is here on Aruba.

Fulfilling her promise, Dolores took a picture recently with her doll at Bunker Bar. Even Dolores thought she could be nominated for “crazy old lady” for this act. The beauty of the doll caught a lot of attention. Humorously, Dolores comments that the doll might have tarnished a little but it has fewer wrinkles compared to her. Many people asked about the doll’s name, and finally, she called it “Miss Aruba”.

Mrs. Dolores Rutski approached MANA with her desire to gift “Miss Aruba” to the museum, ensuring a good home for her at her native island. This was accepted with a lot of love, since MANA already has two antique porcelain dolls, co-financed through UNOCA, which will incorporated to the project “Keeping Heritage Alive through Time”. The new exhibitions that are part of this project are planned to be completed by mid-2023. This fabric doll, an artisanal jewel from last century, will be part of the developing exhibitions.