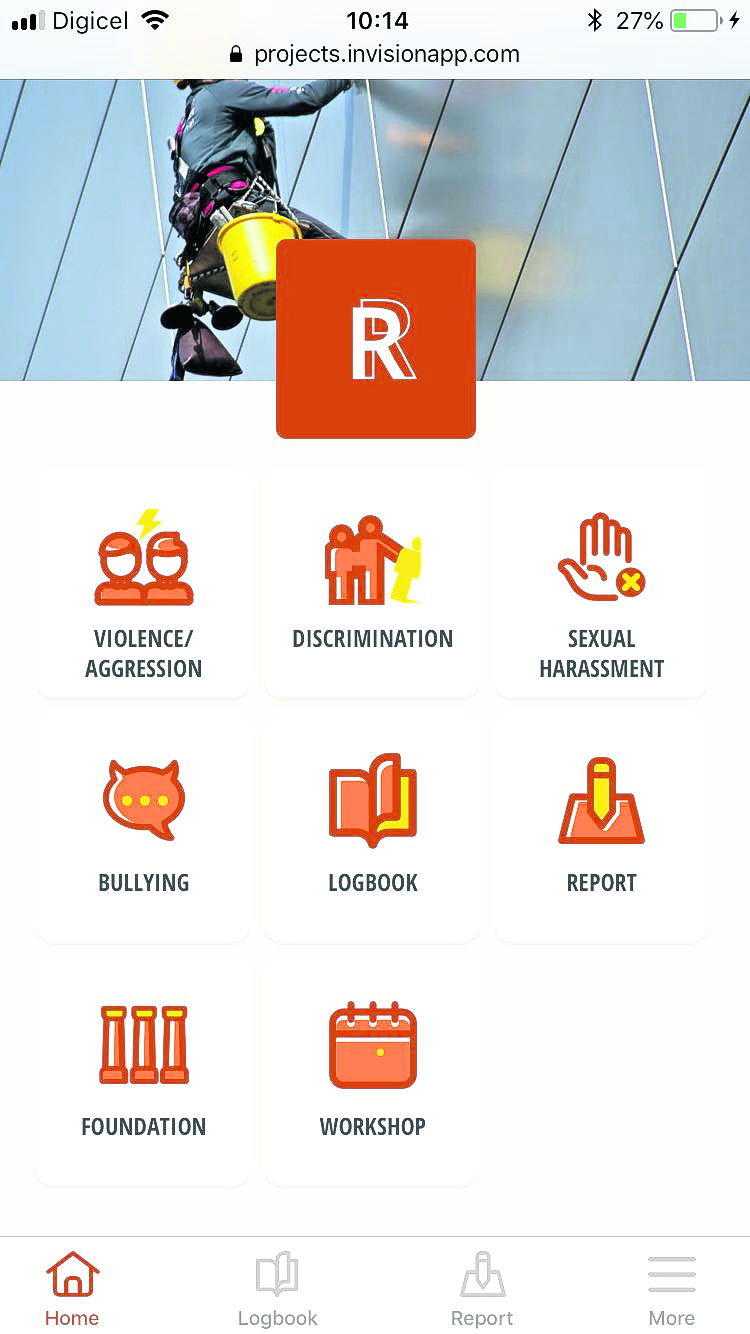 ORANJESTAD – Dutch advocate and expert Karin Bosman firmly keeps on going with the battle against harassment at the workplace: book, research, workshops, lectures all over the world and even a 500k walk from the Trump Tower in NY to the White House in Washington. Her latest creation with her foundation About Workplace Harassment: an app.

Her latest research on sexual harassment on Aruba shows a big increase (one third): 56% of the workforce reports being a victim of physical sexual harassment at the work, compare to 37% in her previous report. The percentage is even higher, 86%, regarding frequent sexual remarks or comments with a double (sexual) meaning.

But Bosman clarifies: “It doesn’t mean there are more cases. We think the increase has to do with more with awareness because of the #MeToo movement. But also our previous investigacion rattling the cages more on the subject of sexual harassment. People are more aware of unwanted behavior now.”

Research on the neighbouring island shows even an increase of 50% more. “This is a trend noticeable worldwide. Even in Europe more people report harassment. People feel more safe and comfortable to report.” But Bosman admits: it’s still not easy for victims to talk about harassment experiences. “It’s the shame that prevents them sharing their story. Because in general we didn’t learn how to address these experiences.”

About the app
As mentioned she developed an app as a next step to a solution. But as the experiences of victims mostly are very emotional ones, question is: why developing an app. As this can be received as a more distant approach to help dealing with harassment.

“The app provides a lot of information”, Bosman explains. “Not only on sexual harassments but all kind of harassment occurring at the workplace. Like bullying which is also a big problem. With the information we make the people more resilient against harassment and also strong enough to report cases.”

Workers can report via the app which is not a formal complaint yet, but more a signal for help. As the app is not only an application but with a full support and professional network as back office, to guide and assist the person feeling a victim of harassment at work. For example the ‘arbodokter’ which is a doctor specialised in work related diseases can guide the victim to a solution, after reporting inappropriate behaviour. For example, the specialist can facilitate a session between the victim and accused. “In the case of bullying this can also mean a session with a whole group of employees.”

Bosman continues: “So the app is a low level tool for people to address the situation quicker. But also it also motivates the employer to implement a policy on harassment in an easy way. And motivates workers to address unsafe situations such that the employer can act more quickly. The benefits for the employer are that employees stay healthy, lesser sick leave and people quitting their jobs.”

One of the main motives for not reporting harassment is that most people aren’t conscious of inappropriate behavior. Hence the app contains information also videos to show what is tolerable and what not.

What if an employee misuses the app to make a false harassment report on a colleague? Bosman explains that although the reports stay anonymous for the employer, the person filing the report has to put a name. Also in order to get the help from a confidential advisor or doctor.  “And filing a false report itself is considered harassment.”

Situation on Aruba
Aruba doesn’t have a specific law to enforce a safe and healthy workplace. But Bosman explains there’s existing regulation that obligates employers to take care of their employees. “A safe and healthy workplace is not only providing work breaks or putting a helm on for protection. It’s also preventing work related stress which is by the way occupational disease number 1.”

But more can be done she admits with regulation, government policy but also labor and branch organisations can do more. “And also the employees themselves. They have to learn to inform no only on salary, vacation days but also it there’s a policy on harassment. That’s why this app is important to learn an make workers more aware.”

About Workplace Harassment and Medwork Caribbean have joined forces to promote and implement the app on Aruba and also other islands in the Dutch Caribbean. Director of Medwork Ru Croes affirms they already have contact with the Labor Department and the response was positive.

‘Harassment is an issue, the department also acknowledges this. Each year they deal with dozens of cases.” These are reported cases but as the investigations shows: the problem is bigger. With the app, the Labor Department sees an opportunity also to collect data (anonymously). Because they also think that the reported cases are just a tip of iceberg.

Medwork is a company specialised in sick leave management and health care advice. A lot of companies, also the government are amongst their clients. “We see a lot of discrimination. Women for example getting fired because they were pregnant but didn’t told their employer during hiring. They’re not obligated by the way to tell, neither is it allowed to fire them because of the pregnancy.”

Croes also explains that hotels due to company policies which are mostly internationally based because of the owners/ management, do have protocols against harassment. However the public sector doesn’t have a protocol at all, as also the latest investigation of Bosmans foundation shows. 85% of the respondents working in the public sector answered ‘no’ when asked if such a protocol existed at work. Bosman comments: “It would be marvellous if they would set the example.”