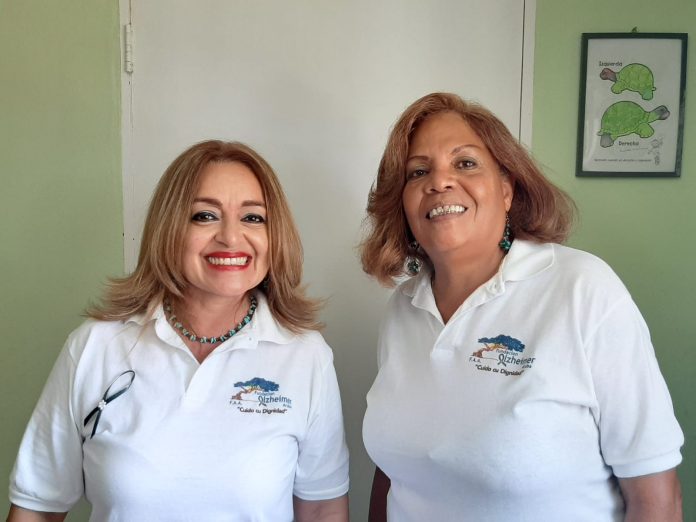 This week, Alzheimer’s Aruba Foundation held a press conference to inform the community about the beginning of Alzheimer Teal Ribbon Awareness. This year marks 20 years of celebration.

This puts an emphasis on awareness in the community about the life of a person after they receive an Alzheimer’s diagnosis. Melva Croes-Yanez, president of the foundation, explained about the developments they have been confronting, and said that the Covid-19 pandemic brought with it a lot more work than what they were expecting.

She also mentioned the challenge brought on by the uncertainty of a lot of their clients who got in touch with them during and after the pandemic. Sometimes, people approach them saying that they have dementia or Alzheimer’s, which she considers very worrying because she notices that people themselves don’t know what is going on and are looking for clarity, not knowing what comes next after they receive their diagnosis.

“They can become more depressive and more uncertain”, she says.

This is the reason why during this week they also want to pay attention to a lecture and cinema night that they are organizing to help the community to better understand what comes after a person receives a diagnosis of Alzheimer’s.

Croes-Yanez says that in Aruba, once a person enters a hospice, “it seems like their life is over and that the family can’t do anything more.”

“Some of them die within a few months of arriving. These people suffer discrimination for having a neuro-cognitive degenerative condition like Alzheimer’s. Life after diagnosis is very important, and the community needs to be aware of this”, she says.

She said that more attention needs to be paid to this topic, because older persons – and sometimes younger – who are suffering from these types of conditions, oftentimes they don’t know what is happening to them. The people around them don’t know what to do either, and confusion can set, as she says. Many times, abuse is also taking place because people lose patience, or the person can be overly medicated to keep them calm. “That is not a quality of life. This is why the community needs to be made aware with valuable information, because there is no cure and it seems there will not be a cure”, she said.

Croes-Yanez added that there is a tendency to refer to everything as dementia or Alzheimer’s, which brings a lot of confusion, and can have as a consequence that the caretaker of the patient can make certain mistakes. The community needs to be alert and needs to receive information. “If it happens that we find ourselves confronted with this, we know how we would want to be cared for, because more than 50 million people around the world are suffering from a neuro-cognitive disorder – which in the past was called dementia”, she said.

This week, they have a schedule of activities during which they will publish information regarding worldwide data in order to inform the community about the state of affairs. Today, 22nd of September, they have a lecture at Savaneta Community Centre at 7pm, and on Saturday at 7pm there will be a mass at Sagrado Curason in Savaneta.

Croes-Yanez commented that mental health is a problem all around the world, and on Aruba, a small country, this is magnified. “If we can all begin pooling our strength together, we don’t need to have problems. In Aruba, often there are professionals that don’t want to work together with others, or cannot, but our people deserve better. Our people deserve better care, not care which puts the safety of our people into question, the safety of the patients of Alzheimer’s or other similar conditions, which often is insufficient and puts them in danger”, she emphasizes.

For this reason, she finds that everyone over the age of 65 needs to join together and begin thinking about their safety and security, so that they can spend their last days with a high quality of life, not like right now, where she says, when a person reaches a certain age, society treats them like “they’re good for nothing”.

Aruba to us is truly our second home