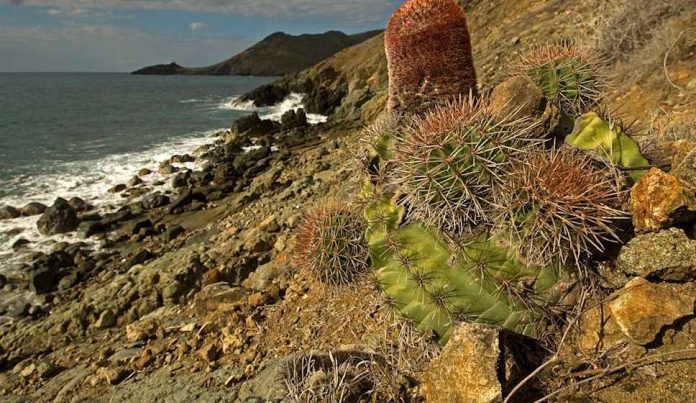 Aruba is the smallest, driest and windiest of the three Leeward Islands of the Dutch Caribbean. Despite this, it has a surprisingly varied landscape. The island’s connection, via the continental shelf, to the South American mainland means that Aruba’s flora and fauna are quite different from her sister islands — Bonaire and Curaçao. Aruba’s stunning geological features include grottos, caves and giant rocks (tonalites) fashioned by the elements. Aruba is famous for long sandy beaches and strong trade winds, which make the island a paradise for beach lovers and windsurfers but a challenging environment for plants and animals.

Coastal lagoons with mangrove forests and extensive and well-developed seagrass beds at the southern part of the island are a magnet for sea turtles, as well as an important base in the marine food chain.

Covering almost one fifth of the total land area of Aruba, the Parke Nacional Arikok includes the island’s highest hill, Mount Jamanota. Located on the island’s windward shore, the park gives access to the rough lava hills and limestone rock formations typical of this arid island. With its fragile dry cactus forest and extensive scrublands the park is home to over 50 species of native trees and is the last protected refuge for Aruba’s endemic rattlesnake, the Cascabel, and their irresistible burrowing owl, the Shoco. The park not only contains outstanding nature but also a rich cultural history. This includes a renovated farm area (cunucu) and early Arawak cave paintings, which were used as the inspiration for the park’s iconic logo.

Our spotlight moves to one of the Caribbean’s most personable succulents, the Pope’s Head Cactus (Melocactus intortus). Its genus name is Melocactus, meaning “melon cactus”, referring to its short, round, watermelon-like base. The most interesting part of this plant however, is the strange, red, bristly “cap” (called a cephalium), which grows out the top of the green base and can reach heights of up to 1 m (~3.3 ft)! Using your imagination, one can really see a green “head” topped with a tall, red, clergical “hat”. This cactus can be found clinging to rocks in some of the drier, less hospitable climes throughout the Caribbean, Mexico, and South America. It’s quite a common sight while hiking in the scrublands of both the Windward and Leeward islands, though different species inhabit the northern and southern ranges. This particular specimen comes to us from St. Maarten. As if its spiny hat was not enough, the pope’s head cactus also sprouts tiny, fuchsia flowers from its cephalium. These flowers give way to bright pink, waxy, cone-shaped fruits. The fruits are edible and have the seedy consistency of a crunchy kiwi, though their flavor is quite light. Lovely to look at and delightful to taste, but do remember to mind their sharp spines and leave enough fruit for the plants to procreate.

The next time you are having a wander through our starkly beautiful sub-tropical dry forests, don’t forget to look down and admire the quirky and stout pope’s head cactus. Source: DCNA.

A day in the life of a female journalist