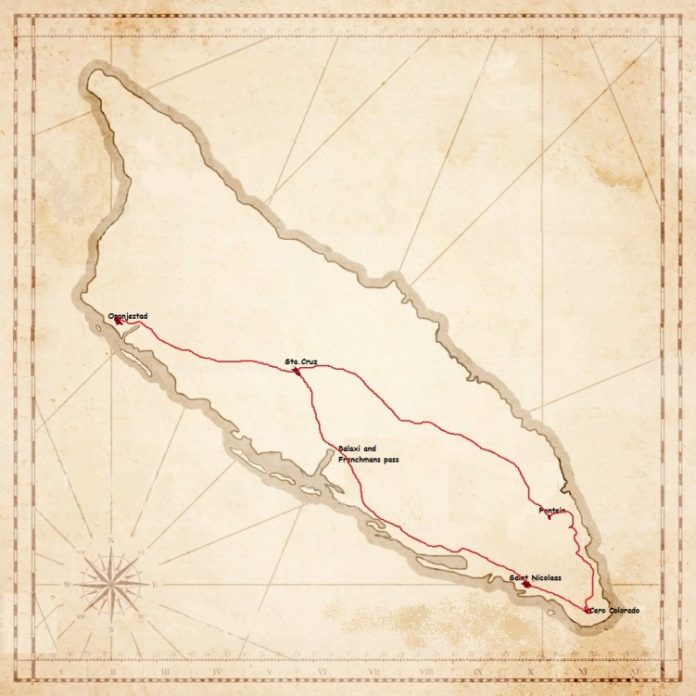 A scientific journey across the island- Part II Arriving at Saint Nicolaas, Prof. Martin continues to this town situated on the bay with the same name. This is the port of the phosphate mines of Colorado, consisting only of a few buildings belonging to the mine company. Its harbor has been improved by the management of the mines and connected by a railroad with Cero Colorado. “Incredible all what has been dug up. An enormous mass of phosphate lies piled up, mainly ferriferous and for this reason not yet exported, the government dues for this grade being too high for it to be sold with profit. The chief manager, whom we met here, cordially welcomed us, and in his company we rode to his house at the foot of Colorado, where we spent the night and half of the next morning.”

Pic.2. Donkeys where a very important means of transportation.

“On the morrow, January 30, I viewed the rich phosphate mines of Cero Colorado. We also visited the east-side of the mountain, where already in the previous century a German mining expert wielded the axe in order to examine the quartz found in the rock here for its gold-content. However rich a harvest suchlike galleries may have yielded afterwards on this island; his toil did not find its reward, so that he had to abandon his ill-starred project. The abandoned mine made by him has now been flooded by sea-water and soon the waves will have succeeded in effacing the last traces of human labor by burying the shaft in their laps and putting the stamp of inviolate loneliness so typical of the entire region upon this mine too; for lonely these rocks are”. Pic.3. Sero Colorado the elevation how it looks today

After a description of the landscape Professor Martin tells about his journey to Fontein.

“We turned off in the direction of Fontein, but because it is impossible to traverse the low limestone plateau stretching jaggedly between Fontein and Colorado, there was no alternative but to take the road along the north coast of the island. Sand, blinding sand, that is the plain between the plateau and the coast, with here and there some shrubs of so-called grapes, a serious obstacle to the progress of our heavily loaded animals. The boys with the pack-donkeys were soon lagging behind, which forced me to load the stones I was collecting on to my own donkey, a procedure attended with many difficulties. At first I was aided by the pistol-holsters of the Spanish saddle, whose faded stitching bore witness to its having seen better days; but these were soon full, and so I crammed my treasures anyhow into the pockets of my clothes. This greatly troubled my long-ears, as the stones were bumping against his body at every step, so that we were finally obliged to give up our attempt to ride on in advance, and waited for the pack-animals to come up, however much we disliked doing so in the scorching afternoon heat, which was occasionally alleviated when the trade wind wafted some coolness toward us. “At half past five we arrived at Fontein, just in time to write up our diaries before going to rest and to bestow the stones safely, as it is better, considering the extremely primitive conditions of life here, to do by daylight than when darkness has set in. At Fontein in particular this proved to be the best thing, for only here did we fully perceive how little prepared we were for anything in the nature of a journey of some days on Aruba. This realization came upon us unawares; neither on Curacao nor during our short stay at Oranjestad had we gained an insight into the true poverty of the island. Thanks to the good care of Evertsz of Colorado, who had given our guide some additional provisions along on his way, we at least had something to eat. One half of a pewter spoon of which the front half, the one normally used to scoop up the food, was lacking, our clasp-knives, a small bowl and an old water-jug, such was our table-ware…

This story will continue.

To get to know more about Aruba’s stories of origins, about animals and culture, art and desert gardens, visit our native at Etnia Nativa. Our renowned cultural encounter session has been entertaining curious participants for decades. Mail us at etnianativa03@gmail.com to confirm your participation. Our facilities and activities take place close to high rise hotels.