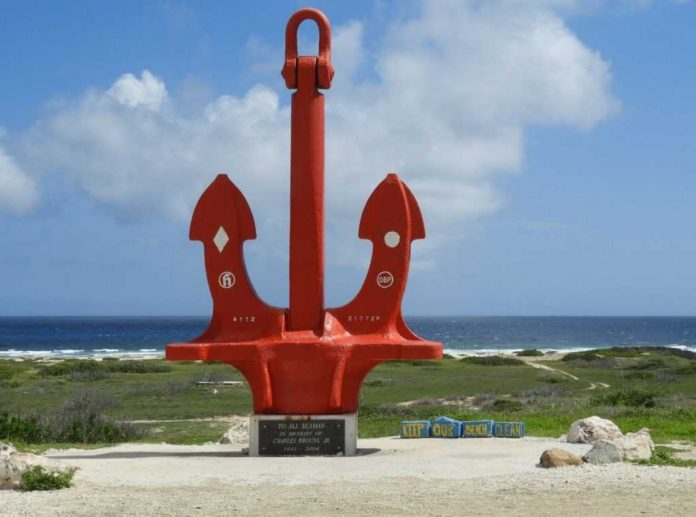 At the south east coast of the island, standing alone on a windswept and barren land stands a popular Aruba landmark – a large anchor.  It overlooks the sea just beyond, watching over the shipping lanes.  It stands there in memory and in honor of all seamen who have lost their life at sea.

The anchor is a “must see” landmark when you visit Aruba. It is among the most photographed historical landmarks for the island. You want to make sure you add this stop on your itinerary when you are visiting the south coast of Aruba. The bright red anchor against the backdrop of the deep blue Caribbean sea and the azure blue skies, make a great backdrop for your vacation pictures.

The anchor is located at the entrance to Gate 6 to the former Lago Colony. It is on the outskirts of Seroe Colorado, on the south east point of the island at the “T” junction to Baby Beach.mDepending on where you are staying on the island, follow the signs that indicate the way to Baby Beach. Once you reach the T-junction, it will be right in front of you.

On the anchor there are some numbers. The 4112 and 4115, which are believed to be the serial numbers that refer to the “fluke” or horizontal and vertical parts of the anchor, respectively. The number 21772K refers to the weight of the anchor in kilos.

This type of anchor was manufactured by Hoesch Dortmund Horde, at a foundry located in Germany.

Where did the Anchor Come From?

There are a number of stories as to the origins of the anchor, which one do you think it was? (Unfortunately the mystery has never been solved, so your imagination can pick which one you think it might be!)

“According to Mr. Manuel M. Curiel, an ex-Lago Tug Captain, a fully laden VLCC (Very Large Crude Carrier)  was seeking a mooring at the 15-mile anchorage, known as Bara, on the southern part of the island. This is the usual shallow mooring location for ships awaiting orders, etc. The weather was rough with strong current. The normal procedure is that they would walk out three shackles (about 90 feet) until the anchor touches the bottom while the chain must rest on the bottom. Subsequently, they will walk out some extra shackles and when the ship starts to swing or lean on one side, the anchor is properly set. Because of the rough weather, unfortunately they did not get the time to walk out the extra tackles and because of the tension exerted on the winch, it broke, and they lost the anchor and its chain.“

“Mr. Curiel also said that at one time a small tanker with a Korean crew, while lifting their anchor also lifted another anchor near the inner harbor. When the ship asked for assistance, he went with his tugboat along with a barge, to help. But eventually they had to cut the chain and let the anchor go to the bottom because they could not untangle them. ”

How Did The Anchor Become a Landmark?

Sometime between 1980 and 1985, three gentlemen (Mr. Wim Martinus – the Harbormaster of Aruba; Mr. August Genser – the ex-Division Superintendent of Lago’s Laboratory; and Mr. Willie Davis – Owner of Filtec at Zeewijk in San Nicolas), were having a conversation with Mr. Charlie Brouns Jr. at his famous Charlie’s Bar and Restaurant in San Nicolas. Charlie, who was a visionary and had dreams for developing the San Nicolas area, told these gentlemen that he would like to come up with something innovative for the San Nicolas area to draw tourism to the area.

The “anchor”, which at that time was being stored at the Oranjestad harbor, was suggested as an option. Charlie liked the idea! He then contacted the President of Lago for permission to acquire the anchor. He was granted permission and the anchor was then relocated to its present location and dedicated “To All Seamen” on the occasion of the closing of the Lago Oil Refinery on March 31, 1985.

Through the years the Anchor was slowly weathering from the wind and salt. As time passed, sadly the origin and purpose of the anchor slowly faded away from people’s memories.

After Charlie Brouns Jr died on September 15, 2004, his friend Mr. Sam Speziale, requested assistance from the management of Valero Aruba Refinery to help maintain the monument. The Valero Aruba Refinery, graciously sandblasted and painted the anchor and poured a concrete pad around it. On April 17, 2005, the anchor monument was rededicated “To All Seamen” in a formal ceremony in memory of Charlie Brouns Jr.

Today, the anchor stands both as memorial to all seaman who have lost their lives at sea, but also as a silent reminder that Seroe Colorado is part of San Nicolas and that San Nicolas is still a vibrant and important part of the island of Aruba.