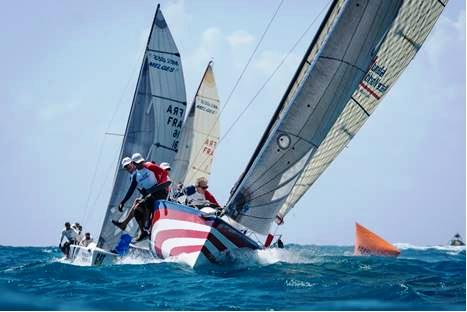 ST. MAARTEN (February 7, 2018) – The St. Maarten Heineken Regatta has been a Caribbean favorite for almost four decades, and this year’s 38th edition, scheduled for March 1-4, will prove no exception to the rule. Already, 75 boats representing 22 countries have registered to race in the island of St. Maarten’s first major event since Hurricane Irma passed through in September. With three weeks to go, organizers have ensured that the parties and entertainment will continue to be legendary as they complement four days of serious on-the-water competition.

“We have been saying that the best way to support our island is to come to it, and by the looks of the entry list, which is growing daily, that is exactly what the sailors are doing,” said Regatta Race Director Paul Miller, adding that the 38th edition will aim to raise funds for dedicated marine, humanitarian and environmental efforts through the K1 Britannia Foundation, the St. Maarten Nature Foundation, the St. Maarten Sea Rescue Foundation and the St. Maarten Yacht Club Regatta Foundation. “We hope to act as an example of strength and solidary, and help raise awareness as we continue the rebuilding of the island.”

Headlining the regatta’s concert series this year will be Grammy Award-winning musician Shaggy, who has offered to perform for a highly reduced fee to support the fundraising efforts. He will be joined by other notable talent, including Carnival legends Destra and 3 Cylinder.

“People keep coming back to the St. Maarten Heineken Regatta, because it’s good competition and a great place to race,” said Matthews who first raced in the event over 25 years ago. His team won its class last year, racing his Humphreys 39 Oystercatcher XXX1. “We’ve done quite a lot of sailing in the Caribbean, and I have had 31 race boats under the Oystercatcher name, but this year we will be racing a new boat coming down from America, which is slightly larger than what we competed in last year. We’re very competitive, but at the same time we sail for fun.”

Rob Butler and his Canadian team on the Reflex 38 Touch2Play Racing raced in the St. Maarten Heineken Regatta for the first time last year and will be returning this year. “I’ve done a lot of regattas in my lifetime all over the world, and it’s pretty hard to match the St. Maarten Heineken Regatta,” said Butler whose team took second in its class last year. “When it comes to sailing, there are not many places that can rival the Caribbean, and St. Maarten, in particular, is just a fun place to sail. With all the different classes and the ability to charter race boats onsite, it is no surprise there are so many boats that enter every year. That, on top of the amazing parties and the incredible entertainment they bring in, makes it a pretty spectacular event.”

The regatta, kicks off Thursday, March 1 with the separately scored Gill’s Commodores Cup. On Friday, the fleet embarks on the event’s 26-nautical mile Around the Island Race before taking on a series of windward-leeward races on Saturday and a single coastal race on Sunday. Each day of racing is rounded out with shoreside entertainment from the “Regatta Village” located at Princess Port de Plaisance Resort and Casino and the Yacht Club at Port de Plaisance (across from race host St. Maarten Yacht Club.

For access to press releases, material, editorial free photos and/or press boat sign up, please fill out the Media Accreditation form at https://heinekenregatta.com/register/

For up-to-date information regarding lodging, marinas, charter options and beyond, visit http://heinekenregatta.com/