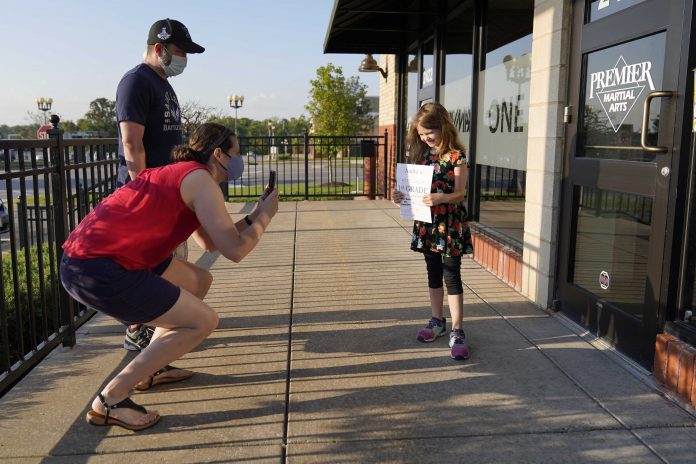 A dance studio in Florida. A martial arts center in Missouri. Libraries in San Francisco. These and other places are taking on a somewhat unlikely new role this fall — welcoming children for supervised distance learning while their parents go to work.

With many schools still closed by the coronavirus pandemic, public and private alternatives are sprouting up across the nation to watch over children as they study.

The sites provide a lifeline for families that struggled through virtual learning last spring, but organizers acknowledge they are a poor substitute for schools with professional educators. And by inviting students to congregate in new spaces, experts say, the programs risk subjecting caregivers to the same virus dangers that closed schools.

“It’s creating the same situation as we would for having the children in school,” said Florida International University epidemiologist Dr. Aileen Marty. “So the only way that that works is if you know everybody in that group, a very small group, and everyone is tested and tested negative.”

When schools in Broward County, Florida, announced plans to begin the new year with remote learning, dance studio owner Katie Goughan recognized immediately the challenges for working parents. Her Dance Explosion Co. in Hollywood, Florida, has hired a substitute teacher who is on site from 7 a.m. to 3 p.m. to keep students on task. The studio is charging $150 a week, or a daily rate of $35.

“I thought to myself, ‘What would my parents have done with me?'” Goughan said. “I wanted to alleviate any stress that parents might be under right now trying to find somewhere for their kids to do their schoolwork.”

The studio, which has capacity for 30 students, currently has 10 children during the day, all of them wearing masks, along with temperature checks and lots of hand sanitizer.

Jennifer Quisenberry, 37, a nurse practitioner, is sending her 6-year-old daughter, Audra, to a “distance learning camp” at Premier Martial Arts in Wildwood, Missouri. Her daughter’s district is beginning the year virtually, and she and her husband, who works for a car dealership, have struggled with child care since schools closed. With no family available to help, she had trouble sleeping before finding the martial arts center, which is owned by a former high school teacher.

“We can’t not come to work,” she said. “My partners said I could bring Audra to work. But a hospital is not an ideal setting for a 6-year-old in the middle of a pandemic.”

While affluent parents turn to ” learning pods ” and private tutors, many of the arrangements set up by nonprofits and local governments are designed with low-income families in mind.

In Philadelphia, city officials announced Thursday that they would open 31 drop-off sites at community centers, housing authority properties and libraries for parents who need someone to supervise children attending virtual classes. The program will focus on families with the greatest need, including those who cannot afford child care and those who do not have internet access at home.

San Francisco is creating “community learning hubs” at 40 sites across the city to assist with distance learning for children who are poor, homeless, in foster care or learning English as a second language.

In Kansas City, Missouri, the parks department is working with the Boys and Girls Club and the group Camp Fire Heartland to offer virtual learning to hundreds of students. For participants from Kansas City Public Schools, the city’s poorest district, the program is free.

“It is tough for parents with school-aged children who are too old to go to preschool, and hiring a babysitter or nanny is not an option for their finances,” said Roosevelt Lyons, deputy director of operations for the parks department.

In Orlando, which is hosting distance-learning programs at community centers citywide, families will pay just $5 a day or nothing if they qualify for government-subsidized lunches.

“Some parents aren’t computer literate, so they are very appreciative,” Orlando Mayor Buddy Dyer said. “Also there is the social aspect. There are eight other students, so you get that social interaction and don’t feel so isolated.”

Kansas City area daycare owner Megan Huffman has been deluged with calls from parents begging her to enroll their school-aged children. She may be able to add some kindergartners and siblings of students at her Rising Sun Learning Center, which has one facility in Missouri and another in Kansas.

But she said her own experience offering virtual instruction to staff members’ children this past spring was less than ideal, and she is planning to send her own 6- and 8-year-olds to a private school offering in-person instruction.

“Trying to get 20 kids from six or seven grade levels from 10 districts on task is damn near impossible,” she said. “Day care has been open every day through the pandemic. If it is that dangerous, it doesn’t make sense that day cares are open and schools can’t open.”

Carrie Hutchcraft, chief administrative officer with the Magic House, an interactive children’s museum in the St. Louis suburb of Kirkwood, is offering a virtual learning program that can handle about 80 students each day. Her own 9- and 7-year-olds will be among the participants.

When schools shut down, she made her own job a priority, figuring her children already had most of a year of instruction under their belt. Now five more months have passed.

“I feel like they already have got behind in learning new things last year, but we can’t do that again,” she said.