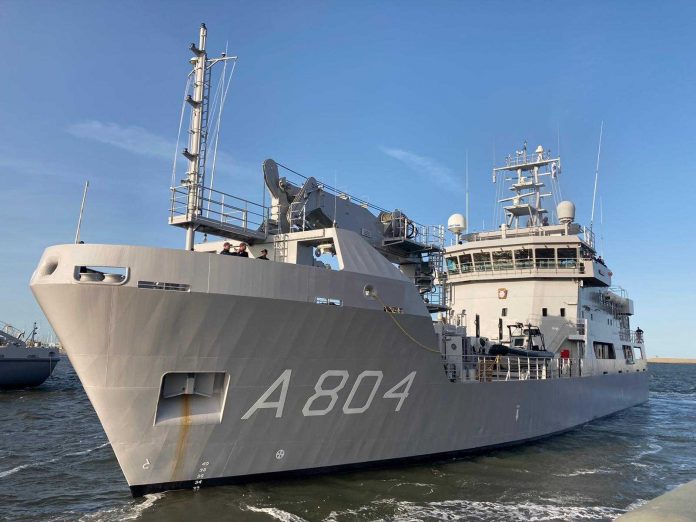 Zr. Ms. Pelican has just left for the Caribbean. The support vessel has been in the Netherlands for major maintenance and a midlife update since the end of last year.

The renovation work was badly needed. It was only the first time that the vessel had undergone thorough maintenance since it was commissioned in 2006. The Pelikaan has been operating in the Caribbean Sea for 13 years. The ship carries out support matters and provides emergency aid there.

With the update, the ship has to move forward for years. “It looks sleek. I am very satisfied with where we are now”, said Lieutenant Commander, David Boom, before leaving.

One of the spearheads in maintenance was the installation of a new crane. This provides a better overview of the FRISCs when they are launched. These motor boats are used, for example, in the fight against drug transports. “We can now also train a lot better,” says Boom. Furthermore, the platform management system, the decks, the paint system and the accommodation received a major overhaul. Despite all the patching, Boom still recognized his ship, he remarked with a laugh. “Sure! The hull and all the big things are still the same. ”

It was initially planned that the Pelican would leave for the Caribbean in August, but events like the corona crisis and the weather caused some delay. Even now not everything is ready, but according to Boom that will be all right. “There are still some things to finish, such as drawings. Those and spare parts are yet to come. But we can function well for the time being. ”

If the trip to the Caribbean goes according to plan, the Pelikaan will arrive there in 16 days. “We had a tailwind for the first few days,” said Boom. “Later we will encounter some depressions and possibly even hurricanes. When we get to the Azores, we know if we can continue sailing. We have good systems that keep an eye on everything.” The Pelican must last at least 11 more years. The replacement for the ship will be built in 2030, after which it should be ready a year later. “11 years with the Pelikaan will work out,” said Boom. “In principle, a ship must sail for 25 to 30 years. I have no doubt that with this we will succeed now that we have implemented these updates.”