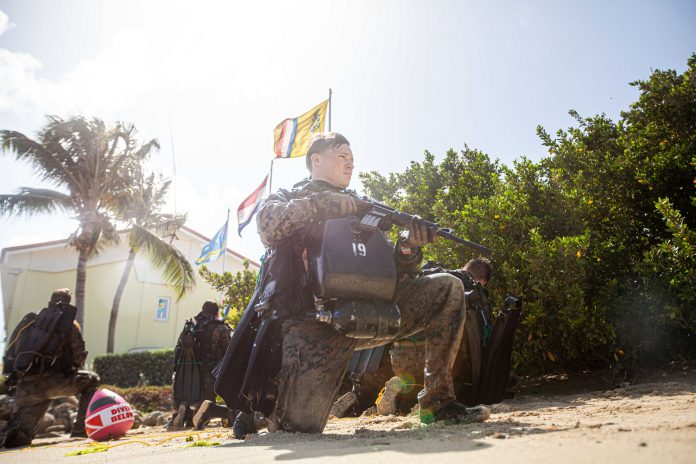 U.S Marines will come to Aruba for training on June 13th. The Caribbean Coastal Warrior 2022 training will start. In this annual training Marines of the United States Marine Corps will be training together with Dutch Marines from the Marine Squadron Carib. The training lasts several weeks.

The military cooperation between the United States and The Netherlands is solid. The U.S Marines from the 2nd Reconnaissance Battalion have yearly practices in Aruba as part of a bilateral training exchange. In addition, Dutch Marines from the Marine Squadron Carib practice yearly in the United States, during the Caribbean Urban Warrior Training on Camp Lejeune, North Carolina.

Caribbean Coastal Warrior is a training whereby especially diving activities take central stage. This is planned to coincide with the last phase of the frogman training. In this way, efficient use can be made of the instructors in Aruba and from The Netherlands. Herewith different integration moments are created, and both sides become familiar with each other’s way of operating and planning. Ultimately, it broadens and deepens the cooperation of all parties. This will increase effectiveness in the event of actual joint efforts.

The waters of Aruba are an extreme suitable training location for both Marine Units. Given the combination of climate, water temperature, water clarity and logistical support from the Marine Barracks at Savaneta, the conditions are optimal for an effective and successful training.

Caribbean Coastal Warrior fits within the ambitions of the Defense Force in the Caribbean Region to position itself (internationally) as a military training hub, both on land, on and in the water. A number of members of the Carib Diving Team will also participate in the training.

The Diving Team Carib is a niche capacity that Defense can deploy for its own diving work such as inspections and/or repairs to quays and ships, but also to support local security partners in the Caribbean.

Aruba birdlife calendar 2020 a fact with support of Hilton