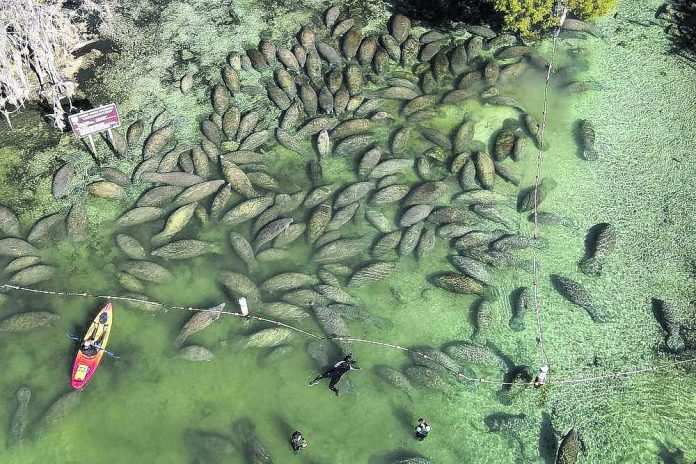 ST. PETERSBURG, Fla. (AP) — U.S. wildlife officials have agreed to revise the critical habitat designation for Florida manatees, which have been dying in record numbers because water pollution is killing a main food source.

The U.S. Fish and Wildlife Service said in a court settlement made public Wednesday that it will publish a proposed revision by Sept. 12, 2024. The agreement comes in a long-running court case involving the Center for Biological Diversity, Defenders of Wildlife and the Save the Manatee Club.

The rule would bring enhanced federal scrutiny to projects that might affect the manatee in waterways in which the marine mammals are known to concentrate. One such area is the Indian River Lagoon on Florida’s east coast, where this winter officials successfully fed manatees tons of lettuce in an unprecedented experiment to prevent more starvation.

Last year, more than 1,100 manatees died largely from lack of food, a Florida record. This year, the Florida Fish and Wildlife Conservation Commission reports 562 manatee deaths as of late May. Dozens more manatees have been rescued and are being cared for at zoos, marine facilities and aquariums around the country.

The manatee critical habitat designation has not been updated since 1976; it’s something manatee advocates have been pushing for since 2008. The state wildlife commission estimates there are about 7,500 manatees in the wild in Florida.

“Safeguarding the places where manatees live will help put these incredibly imperiled animals back on a path to recovery,” said Ragan Whitlock, an attorney for the Center for Biological Diversity. “Protecting the habitat of these magnificent creatures is long overdue, but we’re happy these safeguards will soon be in place.”

The broader issue for manatee survival is improving water quality. Their favored seagrass food is disappearing due to chronic pollution from agricultural, sewage and urban runoff, as well as other sources. Efforts are ongoing to restore the crucial seagrass beds but those are long-term projects.

Florida wildlife officials were heartened this spring to find that some seagrass is growing back naturally in key habitat areas. But they cautioned it would only take one algae bloom caused by pollution to wipe out those gains.

Once it happens, manatee advocates say the critical habitat revision will be another key piece of the puzzle for saving these unique and beloved creatures.

“We are pleased that FWS is finally willing to take this essential step to save our imperiled manatees and hope this signals a shift in prioritizing manatee survival and recovery,” Rose added.

People interested in assisting the manatee program can donate to an FWC-affiliated organization. Distressed manatees can be reported by calling a hotline at 888-404-FWCC (888-404-3922).q

Audit raises concerns about wildfire risks at US nuclear lab