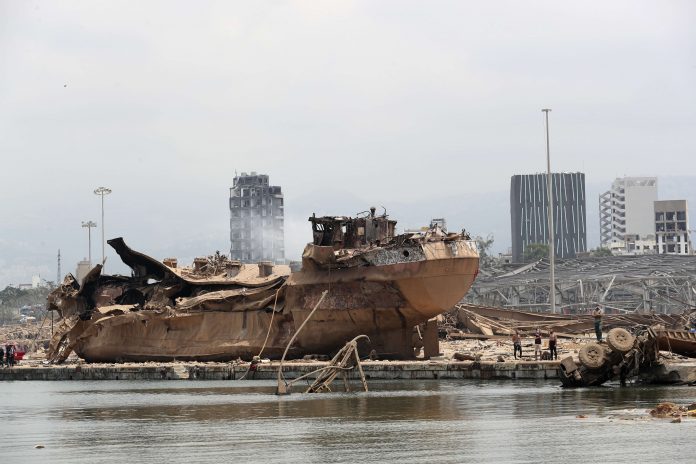 The head of the U.N. food agency said Monday he’s “very, very concerned” Lebanon could run out of bread in about 2 ½ weeks because 85% of the country’s grain comes through Beirut’s devastated port — but he believes an area of the port can be made operational this month.

David Beasley, who is in Beirut assessing damage and recovery prospects, told a virtual U.N. briefing on the humanitarian situation following last week’s explosion in the Lebanese capital that “at the devastated site, we found a footprint that we can operate on a temporary basis.”

“Working with the Lebanese army, we believe that we can clear part of that site,” Beasley said. “We’ll be airlifting in a lot of equipment, doing everything we can.”

Beasley said he had met with Cabinet ministers — who all resigned later Monday — and told them the U.N. needs “absolute cooperation now, no obstacles” because people on the streets are angry and said they need international help but “please make certain that the aid comes directly to the people.”

For the first time since last week’s blast, two ships docked at Beirut’s port on Monday including one carrying grain, according to state media.

The head of the workers union at the port, Bechara Asmar told Al-Jadeed TV that since the grain silos were destroyed by the explosion, the material will be pumped directly to trucks or bags after being sanitized.”

“This is a glimmer of hope,” Asmar said about the first arrivals adding that the port’s 5th basin where the ships docked remains intact despite the blast.

Beasley, the executive director of the World Food Program, said a ship with 17,500 metric tons of wheat flour should arrive in Beirut “within two weeks, and that’s to put bread on the table of all the people of Lebanon and that will give us a bread supply for 20 days.”

Najat Rochdi, the U.N. humanitarian coordinator for Lebanon, told a press conference after briefing U.N. members that Beasley went to the port with engineers to assess what can be done.

“They are very optimistic to start actually this rehabilitation as soon as this week to increase the capacity of the port of Beirut,” she said.

Rochdi said she understands a ship will be arriving Thursday with some construction material, followed by a ship with wheat and grain, “to address the issue of food security and to hopefully make sure Beirut is not going to be short of bread.”

U.N. humanitarian chief Mark Lowcock told diplomats the “swift and wide-ranging” humanitarian response is just the first of a three-phased response to the tragedy.

“The second — recovery and reconstruction — will cost billions of dollars and require a mix of public and private finance,” he said. “The third element is responding to the Lebanon’s pre-existing socioeconomic crisis which is already exacerbated by COVID-19.”

Lowcock, the undersecretary-general for humanitarian affairs and emergency relief coordinator, stressed the Beirut explosion last Tuesday “will have repercussions far beyond those we see in front of us now.”

He urged donors, international financial institutions and the wider international community to “come together and put their shoulder to the wheel,” stressing that the Lebanese people will be served best by a collective response.

Guterres also pledged that “the United Nations will stand with Lebanon to help alleviate the immediate suffering and support its recovery.”