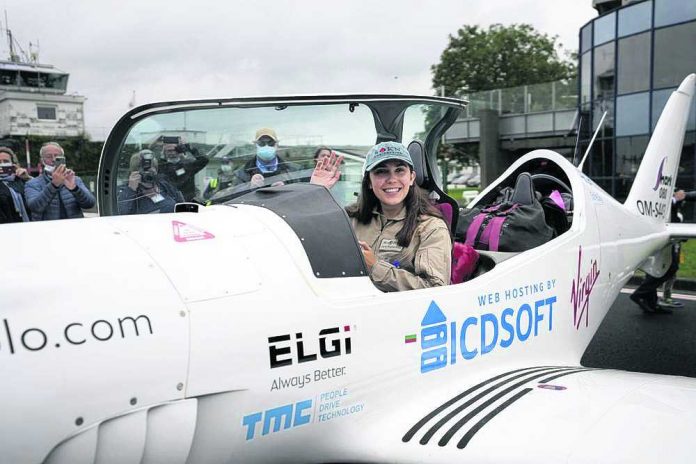 Keep away from test missiles in North Korea. What? Wait.

As teenage pilot Zara Rutherford flew ever onward in a record-challenging global odyssey, she met little as strange or scary as when she tried to squeeze in between North Korean airspace and a massive cloud threatening to cut off passage for her ultralight plane.

“Well, they test missiles once in a while without warning,” Rutherford said. More importantly, she was just 15 minutes from flying over one of the last places one should enter uninvited.

So she radioed her control team to ask if she could cut the corner over the isolationist communist dictatorship to get to Seoul. “Straight away they said: ‘Whatever you do, do not go into North Korean airspace!'” Fortunately the clouds cooperated enough and she didn’t have to continue the crash course in applied geopolitics.

At the age of 19, she is set to land her single-seater Shark sport aircraft in Kortrijk, Belgium, on Monday, more than 150 days after setting out to become the youngest woman to circumnavigate the world solo. American aviator Shaesta Waiz was 30 when she set the previous benchmark.

Flying runs in her blood since both her parents are pilots and she has been traveling in small planes since she was 6. At 14, she started flying herself and about 130 hours of solo flights prepped her for the record attempt, which she hopes will also have a bigger meaning.

With the final touchdown in a plane that looks like a fly among the giants parked at an airport like New York’s JFK, the Belgian-British teenager wants to infuse young women and girls worldwide with the spirit of aviation — and an enthusiasm for studies in the exact sciences, mathematics, engineering and technology.

Two mathematical statistic stands our for her — only 5% of commercial pilots and 15% of computer scientists are women.

“The gender gap is huge,” she said.

Yet once the canopy closed over her cockpit and another six- to eight-hour flight began, lofty thoughts of global outreach receded as she concentrated on one lonely individual — herself.

Using Visual Flight Rules, basically going on sight only, danger lurked even closer than when she would be able to use fancy navigational instruments to lead her through the night, clouds or fog.

Crossing northern California from Palo Alto towards Seattle, she headed into the huge wildfires blighting the area. The higher she climbed to avoid the smoke — up to 10,000 feet — the tougher it was to keep her eyes on the ground.

“The smoke was building up and up, to the point that the whole cabin stank of smoke and I could not see anything but a burnished orange color,” Rutherford said. She had to abort her route and make an unscheduled landing in Redding, California.

Over Siberia, the light played tricks on her vision, sometimes casting doubt whether she saw mountains or clouds. “And for me clouds are a really big deal. Especially in Russia,” with its biting cold. Cutting through such clouds, too much ice might build up on her wings, paralyzing control. “At that point your plane is no longer a plane,” she said.

That, or any other mishap, could have happened on a section of the route where she once saw only one village in six hours.

“I realized if something goes wrong, I’m hours and hours and hours away from rescue and it was -35 C (-31 F) on the ground. And so I thought, actually, I don’t know how long I can survive -35,” Rutherford said. She didn’t have to find out.

The project would have been tough enough in normal times, but the pandemic added another complication — which indirectly led to the North Korean adventure.

Alternative plans to go over China to Seoul were ditched when the Chinese refused permission citing COVID-19, which, Rutherford said, “was slightly frustrating because I’m in the plane at 6,000 feet (around 1,800 meters). I’d be very impressed if I could pass on COVID like this.”

Overall, bad weather, a flat tire and visa issues added another two months to the planned three-month project. The Associated Press spoke to Rutherford by telephone in Crete, Greece, and even there, the weather over the Balkans was so awful it delayed her for days.

Which gave her time to ponder the fickleness of fate. “When you’re fearing for your life, it puts things into perspective a little bit more,” she said. “I mean, a cloud — a cloud — could kill me.”

In wealthy nations, “we grow up in a world with a huge amount of safety nets,” she said. “Actually flying over Alaska, Russia or Greenland, that’s when you realize — actually, there is no safety net. Like, this is really just me. There’s nobody here to help me if anything is wrong.”

The wider world though, which by now has become “this small planet” to her, turned out to hold out much more than fear. She spoke dreamily of the Saudi Arabian desert with its changing colors of sand and rock, the barrenness of northern Alaska, the huge circular Apple Park in Cupertino, California, or the sight of what’s been called the world’s loneliest house on Iceland’s deserted island of Ellioaey.

And she’s come to appreciate some simpler pleasures too.

“Before, it was — yeah — it was about the grand adventure,” she said. “But actually I think, you know, watching TV with your cat has its special things as well. It is very unique as well.”