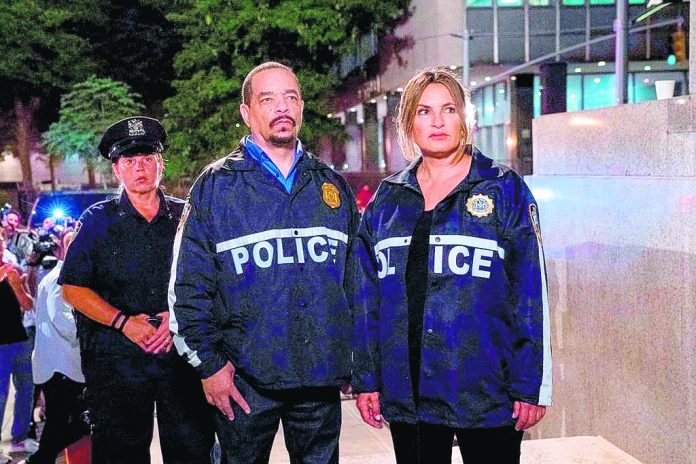 That familiar “cha-CHUNG” sound effect from the opening credits of “Law & Order: Special Victims Unit” this Thursday will signal the debut of a new season and something else — TV history.

His hope now? Twenty-five seasons, of course. “You keep pushing the goal posts back because you don’t get dealt these hands very often, obviously,” Wolf told The Associated Press. “It’s a continuous thrill to be able to do it.”

The Mariska Hargitay-led “SVU” now pulls ahead of “Gunsmoke” and the original “Law & Order,” which are tied with 20. (“Gunsmoke” still has more total number of episodes, while “The Simpsons,” an animated prime-time series, exceeds them both.)

The new record is a feather in the cap for a towering figure in TV history, who last year alone produced five shows that attracted 50 million viewers. More than 150 billion minutes were viewed of “SVU” alone, shown on NBC, USA, ION and Hulu. When everyone’s talking about streaming, he’s still a network guy.

“The brilliance of Dick Wolf is that he still does appreciate and value the power of broadcast television,” said George Cheeks, co-chairman of NBC Entertainment. “He sees the digital experience as an extension of the way to tell stories but launching them on a broadcast network is the anchor that allows other platforms and other ways for people to experience this content.”

Wolf was a New York ad man who left the business in 1976 and moved to Los Angeles to write scripts. He joined the writing team of the revered “Hill Street Blues” and then raised eyebrows when he jumped to the moody, unpredictable “Miami Vice.”

“A lot of people said, ‘How can you go from the best show on television to a cartoon?’ I said, ‘Well, it’s a new era,'” he said. “The stories weren’t ripped from the headline but ripped from the zeitgeist.”

Since then, he’s created a staggering amount of TV. Some didn’t last — like “Mann & Machine,” featuring a robot cop — but he struck gold with “Law & Order,” which sparked spinoffs such as “SVU,” ”Criminal Intent,” ”Trial by Jury” and versions set in the United Kingdom and Los Angeles.

Wolf has also created the so-called TV three-stack — filling Wednesday nights on NBC with back-to-back-to-back hours of “Chicago” dramas, featuring police, doctors and firefighters. “It’s a mini-binge,” Wolf said. “I think it’s a repeatable formula.” (His output also includes the procedural “FBI” on CBS and its upcoming spinoff “Most Wanted.”)

Wolf has triumphed with both actor churn and deep stability. “Law & Order” was a six-person ensemble that employed 29 actors during its 20 years, none of whom lasted the entire run. On the other hand, Hargitay has been on “SVU” since the start, making her Lt. Olivia Benson the longest-running prime-time drama character of all-time.

“I hate to sound cold-blooded, but I usually see recasting as not a disaster but an opportunity. Knock wood, most of the time, it’s worked out that way,” said Wolf. “If you get the right person in there, it works for years. If you get the wrong person, in there, they’re usually gone after a season.”

The achievement by “SVU” is even more remarkable since it survived its season 13 transition from a two-hander — with Hargitay partnered with actor Christopher Meloni — into a star vehicle for Hargitay.

“When Chris left the show, everybody thought it was the end of the show. Most people thought the year after would be the last year. Mariska more than stepped up,” said Wolf. “She is the spark plug, the leader, the face of the show.”

Some didn’t think a TV show that deals with sex crimes would have enough material to last this long but rapper and actor Ice-T, who has been with the show for 20 years, said it taps into something that fans need.

“Sexual abuse is out of control and it always has been,” he said. “A lot of people have actually been through this. I think it’s part show, part therapy. Maybe they didn’t get justice in their life, but they look for justice on the TV show.”

Paul Telegdy, the other co-chairman of NBC Entertainment, said his older daughters watch “SVU” and are stunned to see in reruns topics of sexual misconduct addressed long before the #MeToo movement took off.

“They watch it and they cannot believe how of-its-time even the older episodes were, how fresh and relevant it is,” he said. “It’s had an incredible social role.”

Being a guest star on a Wolf show is a rite of passage and everyone from James Earl Jones to Julia Roberts has been featured. Liam Neeson made his first appearance on American TV in “Miami Vice” and the new “SVU” season kicks off with a guest spot from Ian McShane, an actor Wolf has long admired.

“People who don’t do television do this because they associate it with a certain quality level and a certain interest level,” Wolf said, crediting show runners Neal Baer and Warren Leight.

Among Wolf’s keys to TV longevity are a tendency toward self-contained episodes, which helps syndication, and a deliberate attempt not to grind his shows in too much reality.

His lawyers, cops and firefighters dress in outfits that are generic, and the writing tends to avoid buzzy cultural references, which can date them. On a Wolf show, it’s hard to tell what year it is, much less the decade.

Wolf expected to break the prime-time record back in 2010 when the mothership “Law & Order” tried to reach 21 seasons — but it wasn’t meant to be. NBC seemed to signal it was renewing the show but then canceled it.q