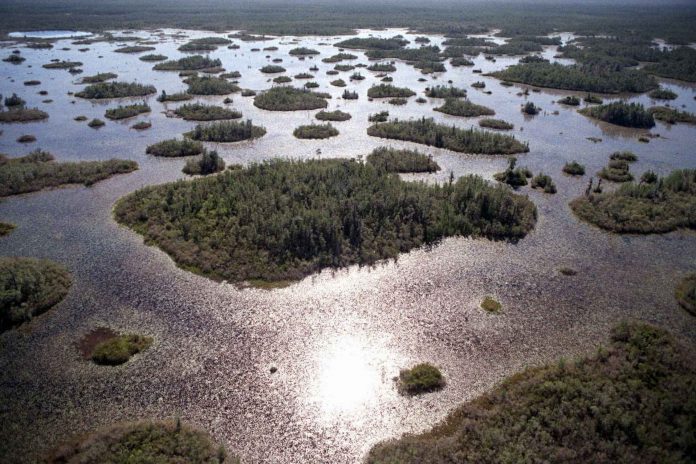 A mining company said Tuesday that it plans to dig for minerals without a federal permit at the edge of the vast wildlife refuge in the Okefenokee Swamp, a big step for a once-embattled project that’s now benefiting from the Trump administration’s rollback of environmental rules.

For more than a year, Twin Pines Minerals pursued a permit under the federal Clean Water Act to mine less than 4 miles (6.4 kilometers) from the home of the largest U.S. wildlife refuge east of the Mississippi River. Conservationists worry mining could cause irreparable harm to a fragile ecosystem that serves as a habitat for alligators, bald eagles and other protected species.

The Army Corps of Engineers, the agency handling the permit request, recently concluded most of the wetlands that would be drained or otherwise affected by the proposed mine are no longer protected under federal rules recently revised at the direction of the White House.

Twin Pines President Steve Ingle said in a statement Tuesday that his company is moving ahead with plans to mine on nearly 600 acres (243 hectares) near the Georgia-Florida line.

“Because waters of the United States will not be affected,” Ingle said, “no federal permits will be required.”

Allowing the mining project to bypass federal permitting threatens “a conservation tragedy,” said Christian Hunt of the environmental group Defenders of Wildlife. Others called the decision an early consequence of a sweeping policy change that’s made waterways more vulnerable to pollution and destruction from development, industry and farms.

“These decisions are being made across the country, and we’re only starting to see the consequences,” said Geoff Gisler, a senior attorney for the Southern Environmental Law Center. “I think what we’ll see over the next several months, until this rule is thrown out or changes, is that we’re going to lose the streams and wetlands that we depend on.”

In January, heads of the Environmental Protection Agency and the Army Corps signed the policy change narrowing the types of waterways that qualify for federal protection under the half-century-old Clean Water Act.

President Donald Trump had long pushed for revision of Obama-era rules adopted in 2015, calling them overly burdensome on builders, industry and farmers. Environmental groups say the rollback allows pollution of now-unprotected waterways and destruction of some wetlands that serve vital functions filtering contaminants and providing buffers against flooding of adjacent uplands.

As the Army Corps weighed concerns from conservationists and government wildlife agencies, Twin Pines withdrew its application in February. A month later it submitted a new plan that significantly shrunk the project.

The nearly 600-acre footprint Twin Pines announced Tuesday is even smaller, less than half the size the company originally proposed.

The Army Corps reassessed certain wetlands at Twin Pines’ request after Trump’s new clean-water rules took effect in June. The agency confirmed Tuesday that, under the rules change, the tract would no longer require a federal permit.

“This property now has a large, contiguous, mineable area in the center of it because those wetlands have now been removed from our jurisdiction,” said Jason O’Kane, regulatory chief for the Army Corps’ Savannah District, which handled the Twin Pines permit application.

The Fish and Wildlife Service said in a letter to the Army Corps a year ago that there was “great uncertainty” surrounding how mining near the swamp’s edge might affect its ability to hold water.

“The Service cannot definitively say that the mining proposal will significantly affect the environment,” the Fish and Wildlife letter said. “However, we have concerns that the proposed project could pose substantial risks for adverse impacts to (the Okefenokee refuge) and the surrounding environment that may be irreversible even with mitigation.”

Ingle has long insisted his proposed mine would have a negligible impact on the swamp. All of the directly affected wetlands lie outside the Okefenokee’s boundaries.

“Our studies have shown that mining can be conducted safely, such that it will not impact the area’s waterways, groundwater systems, or the swamp itself,” Ingle said.

The company’s initial proposal last year said Twin Pines ultimately plans to expand its mining operation near the Okefenokee to cover 12,000 acres (4,856 hectares). Asked Tuesday if that was still the case, Ingle replied: “It would be premature to say what might come next.”

“If this were to play out in a similar way across the entire thousands of acres, what you would see is a significant impact to the Okefenokee,” said Gisler, the environmental attorney. “When you’re talking about a refuge that is a wetland, allowing a free pass to destroy wetlands all around it is a recipe for disaster.”

Vaccine mandate to kick in for first wave of health workers

U.S. protections for Idaho salmon, steelhead are here to stay