The Stem Embassy is a new organizationg established in august last year, and consists of seven students: four from Aruba and three from Curaçao, who are studying in the Netherlands, Switzerland and the U.S., and have the same mission: generate curiosity and confidence for STEM in an environment that is accessible for one and all on the ABC islands.

STEM stands for learning in Science, Technology, Engineering and Mathematics. 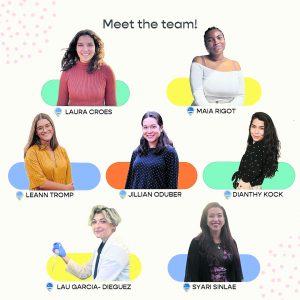 Around the world and in Aruba also, more people are needed in this area for the development of technology. The need for engineers is becoming bigger, and the amount of young people who choose to follow a study in the STEM subjects is not growing fast enough. This is why the goal of The STEM Embassy is to make STEM accessible, as much as possible, on Aruba, Bonaire and Curaçao – the ABC Islands. In order to achieve this, The STEM Embassy organized a two-day STEM camp, called “Ki ta bo STEM?” In Papiamento, ‘stem’ means voice, so this translates as “What is your voice?” The camp was for children and young people between the ages of 12 and 21, and took place on the 21st and 22nd of July at the University of Aruba.

Tromp explained that during the camp, the kids partook in 8 different workshops, including robotics, coding, sustainable technology, biology, diversity and more. There were 100 spots available for this camp, and Tromp said that those were filled in only ten days.

“We never thought that there would be such a huge interest in this event, so we are really happy to see how many kids are interested in these subjects. This motivates us to continue with these events in the future on the other islands. We are so excited to give the children the opportunity to discover exactly what STEM is and all the possibilities that they can achieve with a study in STEM.”

Tromp commented that the goal of this camp was not for every child to choose to complete a study in one of the STEM subjects, but rather, for them to know and learn what exactly is STEM.

This camp finished on Friday July 22nd with the STEM Festival at the University of Aruba, where the participants had their friends and family over to show off all that they did during the two days of camp. The participants had their own booth to show what they worked on. There was also organizations and companies who work in STEM present, in order to give information. The event also counted with a discussion panel and awards for the participants. “This is so that the children won’t just come to work here for two days and then go home and forget what they did. This is for them to learn something that they can continue”, Tromp added.

The group of participants included children and young people aged 12 to 21, as mentioned above, and they had different levels of education. Tromp said some kids went to various levels of secondary education (MAVO and Colegio Arubano), young people studying in EPI (vocational school), people who finished college, among others. The level of education did not matter and also the participants didn’t need to have previous knowledge. Tromp emphasized that the goal was to make the camp as inclusive as possibele.

To finalize, The STEM Embassy thanked their sponsors who made this camp possible through donations.