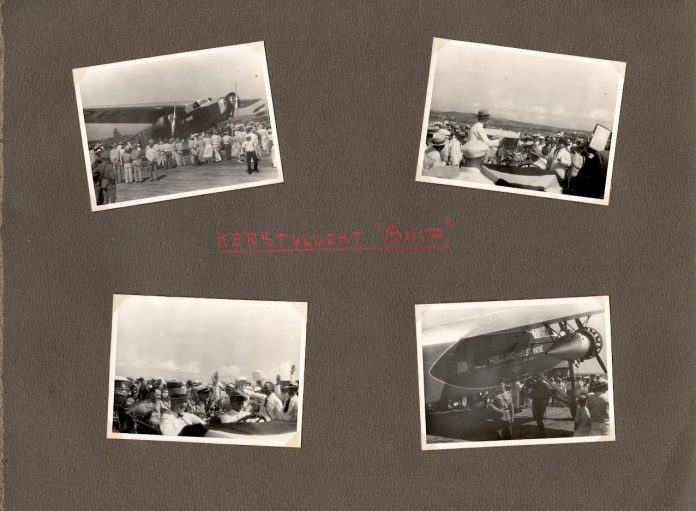 The National Library of Aruba (BNA) is presenting a rare and unique photographic collection on their digital platform of historic photographs of Maarten van Wamelen.

The library acquired and digitized the collection due to its historic value It is currently available to the public. The acquisition of this collection is thanks to the financial support of the Prins Bernhard Cultuurfonds Caribisch Gebied.

The album is about an “ex-pat” worker who lived in Aruba in the 1930s. Maarten Adrianus van Wamelen was an engineer born in 1909 in Dordrecht in the Netherlands. The collection includes the initial trip of Mr. van Wamelen to Aruba on the German ship ‘Heinz Horn’ in January 1933, his job at the LAGO Refinery, his tourist photographs, his private life as an ex-pat in Aruba, and the first flight of the KLM’s “De Snip” airplane in December 1934, the arrival of his fiancé Ms. Nelly Schupper in 1935, their wedding in January 1936 and the birth of their first daughter Mia.

The album also includes photographs taken in Maracaibo, Venezuela, and Curacao. Mr. Van Wamelen later started working for Eagle/Arend Refinery owned by Shell/Koninklijke Olie. In 1939, the Van Wamelen family moved back to the Netherlands, just before the turbulent time in the history of Europe and the World.

he last photographs of the album are photos of the Caribia ship of the Hamburg-America Line (HAPAG). Exactly one month before he took the pictures of this ship, this ship helped 85 German Jews escape Germany and brought them to Venezuela.

During World War II, the Van Wamelen-Schupper left Europe again and established in Curacao, where Mr. van Wamelen took a job at the DOW Curacao. Soon after World War II ended, they moved to Ontario, Canada. It is through an antiquarian that the National Library was able to acquire this gem of a photo collection.

The public can enjoy this unique collection on the Digital Collection of the BNA at the following link; https://digital.bna.aw/album1939.

Time to invest: Premium condominium and house prices in Aruba are...

Aruba Photo Room at Talk of the Town Hotel & Beach...