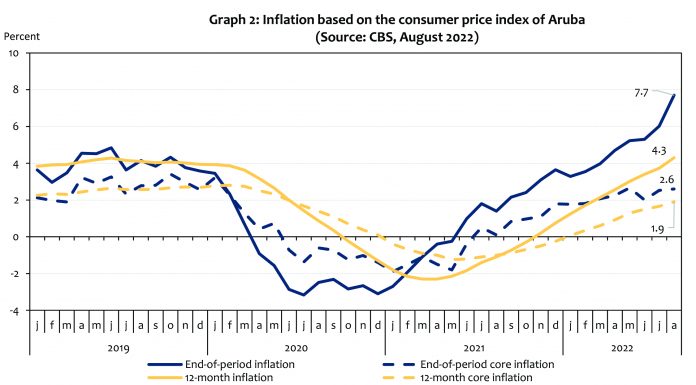 In line with the Monetary Policy Committee’s (MPC) task to evaluate, determine, and provide transparency on the monetary policy actions of the Central Bank of Aruba (CBA), the CBA communicates the following. During its meeting on October 12, 2022, the MPC decided to keep the reserve requirement at 24.0 percent as of November 1, 2022. Accordingly, commercial banks must hold a minimum balance at the CBA equal to 24.0 percent of their clients’ short-term deposits. The decision to maintain the reserve requirement at 24.0 percent was based mainly on the downward trend in the commercial banks’ excess liquidity, as well as the persisting adequate level of foreign exchange reserves.

The MPC considered the following information and analysis during its deliberation:

Maintaining reserve adequacy is critical to keeping the fixed exchange rate between the Aruban florin and the US dollar. To this end, the CBA anticipates international reserves to remain comfortably above the minimum required three months of current account payments. The latter consisting of, among others, consist of import payments, interest payments made to investors, and foreign transfers such as money remittances by foreign workers. Official reserves are forecasted to stay within an adequate range when benchmarked against the International Monetary Fund’s (IMF) Assessing Reserve Adequacy (ARA) metric (Table 1).

The 12-month average inflation climbed to 4.3 percent, and the CBA expects increasing inflationary pressures for the remainder of 2022. This expectation follows from the elevated oil price on international markets, as well as the recent hikes in utility tariffs. Furthermore, the expectation is that Aruba will import much of the soaring prices from its export partners, particularly the United States and Europe.

Aggregated excess liquidity fell from Afl. 1,320.5 million in December 2021 to Afl. 800.7 million in August 2022 (Graph 3). This drop in excess liquidity was principally due to the consecutive hikes in the reserve requirement from January 2022 to July 2022. In August 2022, excess liquidity contracted further. Nevertheless, excess liquidity remained above the pre-pandemic levels of February 2020 (+Afl. 111.6 million). The heightened level of excess liquidity results from ample liquid deposits at commercial banks, exacerbated by the subdued credit expansion. Ample liquid deposits likely relate to the recovery in the tourism sector. However, the expectation is that the Government of Aruba will finance its budgeting deficit locally. In addition, loans related to the hotel sector will probably pick up in the remainder of 2022. Both circumstances entail a downward pressure on the commercial banks’ excess liquidity.

New & unique venue in Oranjestad, a must for visitors! Patio...

Dare To Be You