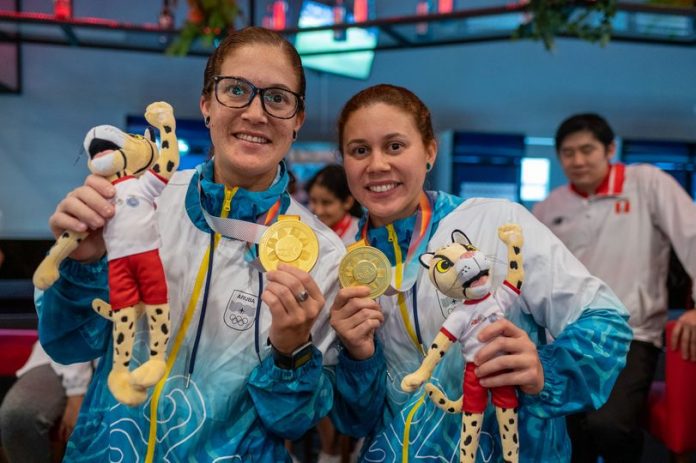 The South American Sports Organization (ODESUR) recognized the great work and historical performance of the Aruban delegation in Asuncion. Because of this, Aruba became known as the Revelation Country in ASU2022.

On the final score, Aruba was 10th place overall with three gold medals and three silver medals, with only 12 athletes participating among big countries in world sports.

The Dammers sisters managed to snag gold medals both in doubles and singles.

Together, they won gold in doubles and then Kamilah went on to win gold in singles.

In the grand final, Kamilah faced off aginast Juliana Franco who beat Abigail in the round of 8. Even though Franco won two of the three games, the amount of pin difference gave Aruba an advantage, and in the end, Kamilah defeated Franco with a difference of 14 pin, winning the gold medal.

Seeing the sublime performance of Kamilah and Abigail Dammers at the South American Games Asuncion 2022, both Aruban bowlers automatically go through to qualify for the Panamerican Games 2023 which will take place next year in Santiago de Chile.

After many days of battle in Encarnacion, Malik arrived to the last day of competition in first place in the rankings and with two points of advantage over Argentina. It wasn’t easy to maintain his position because of bad weather in Encarnacion, Paraguay.

At first it was indicated that they would do a course race, but at the last minute changed this to slalom and this proved difficult with the wind conditions, and Malik lost important points.

Britta Schwengle looks back to a great performance at the South American Games Asuncion 2022. She represented Aruba in Encarnacion at the Parana River. Despite the fact that the competition was suspended on two occasions because of heavy rains, the athlete felt prepared for the challenge.

Encarnacion had a temperature of 13 degrees Celsius, and with rain and strong winds, it felt a little colder. When the officers tested the water temperature, this was 19 degrees Celsius, making the use of a body suit optional. Britta decided to use her tech suit because she is not used to the body suit.

After an hour in the water, the weather darkened again and it began raining heavily, causing an almost complete loss of visibility, making conditions harder for Britta. Despite these challenges, Britta kept her position and in the last lap positioned herself in 11th place.

Britta feels satisfied with her participation in Paraguay and is ready for her next competition representing Aruba once more.

Aruba to me: Allison Braswell