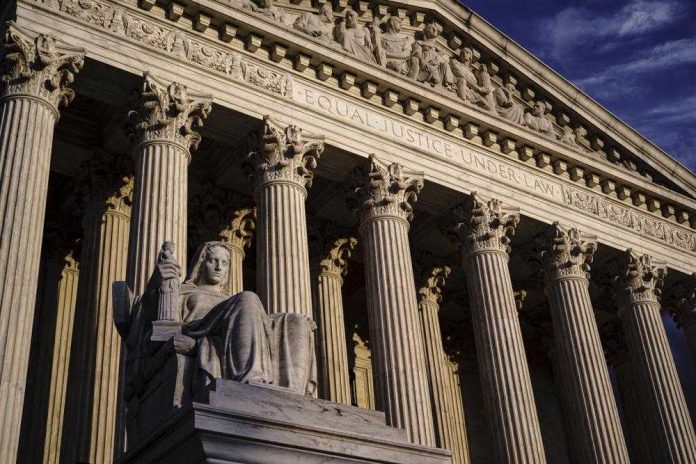 WASHINGTON (AP) — Both sides are telling the Supreme Court there’s no middle ground in Wednesday’s showdown over abortion. The justices can either reaffirm the constitutional right to an abortion or wipe it away altogether.

Roe v. Wade, the landmark 1973 ruling that declared a nationwide right to abortion, is facing its most serious challenge in 30 years in front of a court with a 6-3 conservative majority that has been remade by three appointees of President Donald Trump.

“There are no half measures here,” said Sherif Girgis, a Notre Dame law professor who once served as a law clerk for Justice Samuel Alito.

A ruling that overturned Roe and the 1992 case of Planned Parenthood v. Casey would lead to outright bans or severe restrictions on abortion in 26 states, according to the Guttmacher Institute, a research organization that supports abortion rights.

The case being argued Wednesday comes from Mississippi, where a 2018 law would ban abortions after 15 weeks of pregnancy, well before viability. The Supreme Court has never allowed states to ban abortion before the point at roughly 24 weeks when a fetus can survive outside the womb.

The justices are separately weighing disputes over Texas’ much earlier abortion ban, at roughly six weeks, though those cases turn on the unique structure of the law and how it can be challenged in court, not the abortion right. Still, abortion rights advocates were troubled by the court’s 5-4 vote in September to allow the Texas law, which relies on citizen lawsuits to enforce it, to take effect in the first place.

“This is the most worried I’ve ever been,” said Shannon Brewer, who runs the only abortion clinic in Mississippi, the Jackson Women’s Health Organization.

The clinic offers abortions up to 16 weeks of pregnancy and about 10% of abortions it performs take place after the 15th week, Brewer said.

She also noted that since the Texas law took effect, the clinic has seen a substantial increase in patients, operating five days or six days a week instead of two or three.

Lower courts blocked the Mississippi law, as they have other abortion bans that employ traditional enforcement methods by state and local officials.