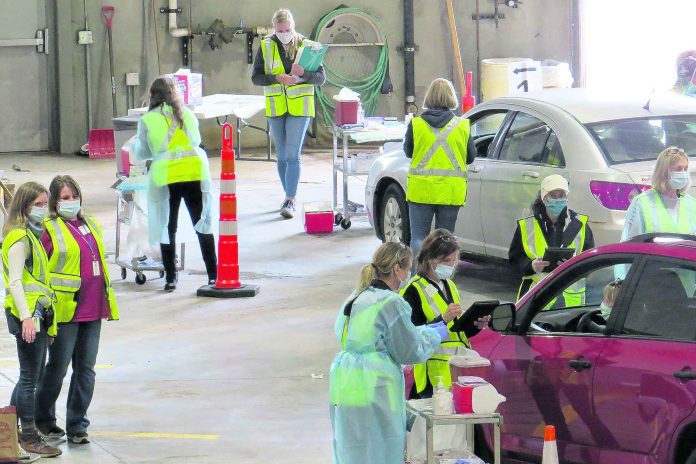 With a COVID-19 vaccine drawing closer, public health officials across the country are gearing up for the biggest vaccination effort in U.S. history — a monumental undertaking that must distribute hundreds of millions of doses, prioritize who’s first in line and ensure that people who get the initial shot return for the necessary second one.

The push could begin as early as next month, when federal officials say the first vaccine may be authorized for emergency use and immediately deployed to high-risk groups, such as health care workers.

“The cavalry is coming,” Dr. Anthony Fauci said Thursday on ABC’s “Good Morning America.” He said he hopes shots will be available to all Americans in April, May and June.

Pfizer also boosted hopes this week, saying early data suggests its vaccine is 90% effective. But the good news came in one of the grimmest weeks of the pandemic so far. Deaths, hospitalizations and new infections are surging across the U.S. — and turning up the pressure to get the vaccine effort right.

In Philadelphia, the health department is counting how many health care workers and others would be among the first in line. In Louisiana, officials are planning a remote exercise this week to play out different scenarios exploring how the process might unfold.

State and local officials are also planning for the likelihood that the first shipments will not be enough to cover everyone in high-priority groups.

Similar preparations are happening at the federal level. Welch listened in last week on a “war gaming” session by the U.S. Department of Health and Human Services.

For the vaccination effort to get off the ground, state officials have been readying systems to track supplies and who has been vaccinated. That information will be fed into a national network and will be critical in giving federal health officials an up-to-date picture of vaccinations around the country.

Providers such as pharmacies and doctors’ offices will also need to be able to look up records, so people do not have to return to the same place for their second shot. More than one vaccine could also become available, and doses cannot be mixed and matched.

“We not only have to bring people back for a second dose, but need to make sure that we have very good records of which vaccine they received the first time,” said Dr. Jinlene Chan of Maryland’s health department.

States already have immunization registries, which will be used for COVID-19.

To better understand whether at-risk groups are getting vaccinated, the CDC wanted providers to report the race and ethnicity of the people they vaccinate. But pharmacies and other providers that do not always collect that information objected.

“We have to be careful not to put too many administrative burdens on providers that are already stressed,” said Mitchel Rothholz of the American Pharmacists Association, an industry group.

He said providers have been told they will have the option to leave that information out.

Providers will also have to report vaccination information daily, which will be an adjustment for those that typically enter data weekly or every couple of weeks, state officials said.

To help people find doses in their area, the CDC wants to put information on a vaccine finder website, which will be updated each day with the latest inventory.

Supplying that inventory information might be a staffing strain for some providers, including a hospital in Utah that said it only has one person who currently enters the information, said Jon Reid, who manages the state’s immunization registry.

“And they don’t do it every day. They do it whenever,” Reid said. State officials in Utah plan to update the inventory, rather than ask each provider to enter it, he said.

States are also working to expand the number of pharmacies, doctors’ offices and other providers that can administer COVID-19 vaccines, to ensure shots are conveniently available.

But enrollment can be time-consuming, Reid said, because providers often need help filling out forms, getting technical systems working and going through inspections to ensure they can meet storage requirements. The Pfizer vaccine needs to be kept at minus 70 degrees Celsius (minus 94 F).

Given the hurdles, Reid does not expect smaller pharmacies to become COVID-19 vaccine providers.

Because of the likely need for two doses given three or four weeks apart, the Centers for Disease Control and Prevention is considering ways of helping Americans remember the second shot, including issuing cards that people would get with their first shot, akin to the polio immunization cards many older Americans remember carrying.

In a rural part of South Carolina, one community health center is planning multiple reminders, including text messages and calls from health workers.

Still, “there will still be some that slip through the cracks,” said Ann Lewis, CEO of CareSouth Carolina, which runs the health centers.

Distributing doses is another issue. The Pfizer vaccine, which could be the first to get the green light, comes in shipments of nearly 1,000 doses.

Shipments might go to a hospital that is easily accessible to health care workers from multiple sites, Lakin said.

“They may have to drive to that hospital to get the vaccine,” he said.

In North Dakota, providers receiving fewer than 1,000 doses will have them shipped to a state warehouse that can maintain the ultra-cold storage.

“We’ll break them down into the smaller quantities and then drive them to the provider,” said Molly Howell, the state’s immunization director.

State and local health departments will break up and redistribute shipments of other vaccines, which are expected to require orders of at least 100 doses, for smaller providers that do not need that many. But even if distribution goes smoothly, officials worry people will not want the shots.

“If there’s going to be any real challenge, to be honest with you, it’s going to be convincing folks to get the vaccine,” said Patrick Peer, who runs the Good Neighbor Community Health Center in Columbus, Nebraska.

So far, states have received far less money than they say they need for vaccine distribution, and it’s unclear if any more federal help is coming. Public health groups estimate that an additional $8.4 billion is needed to pay for staff, data systems and outreach and supply costs.

In rural Minnesota this fall, masked nurses in traffic vests reached into cars to give passengers flu shots. The drive-thru clinic was a way to social distance in the pandemic, but it also served as a test run for someday administering a COVID-19 vaccine.Carlton County has purchased mobile vaccination stations to prepare for similar mass clinics for the coronavirus. But county health officials are also suddenly dealing with a spike in cases, and many questions remain unanswered, including when a vaccine might arrive and how many doses there will be.

“It’s all kind of up in the air,” said Jenny Barta, a public health nurse specialist.

‘Enough is enough’: US students walk out over gun violence