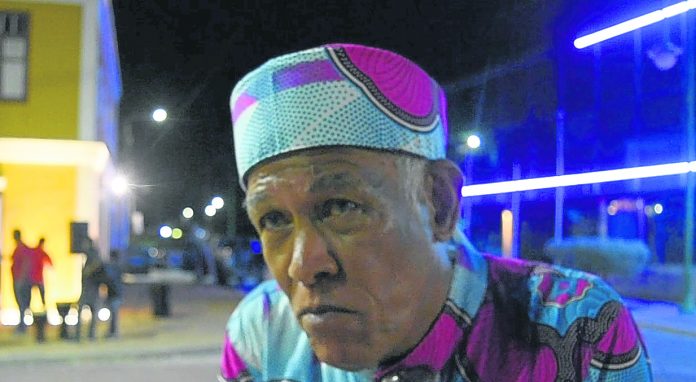 Leon Berenos is an Aruban working around the world, who knows history like the palm of his hand. He is a scientist and sociologist. He loves history, seeing as he worked in media his whole life, around the world. In sociology there is a field related to history, and according to Berenos, he likes history and his background is communications.

According to Berenos, what he likes about his job is that in media you learn many things. “However, I came back to Aruba and what I realized is that 90% of our population know nothing about Aruba, the country where we all live, and there are so many who don’t know about their own country.”

For this reason, Berenos decided to focus on the history for Aruban people, and he wants everyone to know that Aruba is a great island and has a very long history. Our own population must know 388 years of our country’s history and also how they themselves stand as a citizen of this country in the social economic history.

Berenos recently was present during a night of exchange regarding the history of slavery at the Nicolaas Store in San Nicolas, not only to listen, but also to contribute in certain topics related to the physical, psychological and social history of Aruba.

In various occasions there had also been different social cultural activities in San Nicolas, and this with the goal of bringing life back to San Nicolas, for which there needs to be interest among the citizens to transfer knowledge from one to the other.

There is a lot of work to be done for Aruba’s history. If you ask any school child who has finished HAVO or VWO (higher secondary education) and ask them about their own country, you can bet nine out of ten don’t know, according to Berenos. Aruba’s education system needs to match the Dutch education system, which means we take some things on board “and just copy/paste from the Netherlands, which doesn’t fit Aruba.”
According to Berenos, for starters, a Dutch person doesn’t know what an iguana is, but in Aruba we do know about cows and dogs. The situation that Aruba finds it in doesn’t apply only to Education, but it applies to everyone who lives on this island. What is a reality is that Arubans are too focused on other countries, and not enough on their own country and their own talents. For this reason, Berenos is of the opinion that we have a lot to learn.

Nowadays, information is more easily accessible, seeing how the digital world provides a space to find a lot of information to learn from. The digital world means that all knowledge in the world is in the palm of your hand, with your smartphone, TV, laptop, there are no excuses.

When people are searching for information, be it history or other subjects, their quality of life increases. This is why Berenos finds it important for Arubans to know that quality of life is tied to knowledge and not the money that they earn. Knowledge is extremely important, and when you have it, you can transfer this to your family. Talking and communicating with others is very important.

Regarding the history of slavery between Curaçao and Aruba, the difference between the two islands is economy. If economy is going well like on Aruba, government doesn’t pay attention to issues that don’t bring in money, for example culture, literature, and art. What does bring in money is labor. Where there is labor there is money, for example, if you get promoted from bartender to supervisor, and in Aruba, to become a supervisor you don’t need any special knowledge, only need to know how to serve people. According to Berenos, it’s time for the government to see this and pay more attention to culture, literature, which are intangible spiritual aspects that make people more aware of their place.

Currently there are many people that are not aware of their history. Aruba imported people from many other countries, but with them, we also imported their customs. Citizens of Aruba left their own customs aside and took over other countries’.

There are many factors, according to Berenos, that Arubans need to take into consideration, which play a role. Things Arubans do that are not part of our culture. This means that slowly, the Aruban identity was allowed to be lost. The government has a big task of fixing all these aspects, by giving information, formation, education, and spiritual guidance.

Tourists come to Aruba for the sun, sand and sea, which they don’t have in their country. There are also older adults who come to Aruba to rest because they are stressed, and a smaller group that comes for the culture. The latter group is people who heard about Aruba and want to experience what they see digitally, they want to see the real Aruba, but they are a very small group.

But tourists also come for the people, the Aruban people are what attracts most of our tourist because the Aruban is kind and helpful. Arubans make all tourists feel welcome and at home. This is something positive for Aruba and something sociological. When a tourist comes to spend money it’s because they feel at home. The people is what’s most important, Berenos concludes.

Weekly Calendar Of Activities In Aruba