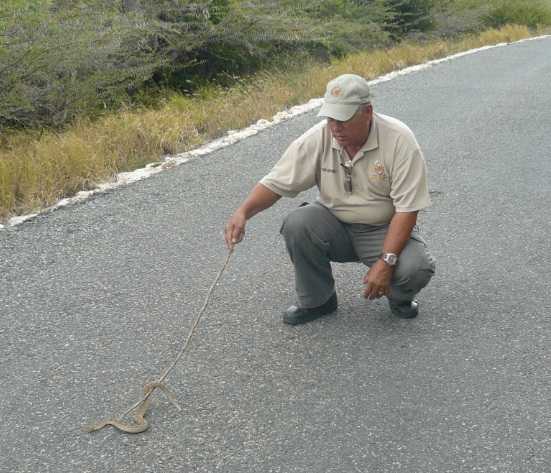 Arikok National Park is home to various unique plant and animal species such as Aruba’s rare endemic rattlesnake Crotalus unicolor). This rattlesnake is locally known as the ‘Cascabel’. But Aruba has two more snake species living on the island: the Santanero and the Boa. 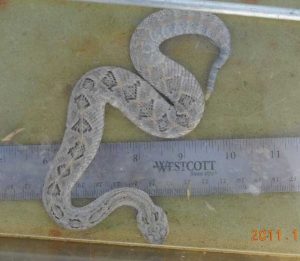 The slender Santanero or Aruban Cat-eyed Snake is typically less than 50 cm long. This snake is recognizable by the large scales on the top of its head and by its pattern of dark brown bands alternating with light brown bands. The belly is plain white or cream colored without any markings. This snake is shy and not aggressive. However, it has enlarged teeth at the back of its mouth and mild venom which is not dangerous to humans. However, the venom can paralyze small lizards and frogs. Santaneros are most active at night when they search for food. During the day, they hide under rocks or leaves. They frequently climb trees and cactus. Santaneros eat toads, frogs, insects, and lizards. You may find Santaneros near dams during periods of rainy weather or crossing roads at night. This snake is found island wide. A Santanero in your garden will keep away the unwanted insects. If you encounter a Santanero around your garden, please do not harm this species. 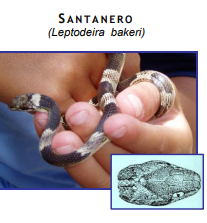 Boas are Aruba’s largest snakes. The longest Boa found on the island was slightly less than 3 m. Newborn Boas average 35 cm. Boas are not venomous. The most distinctive feature of a Boa is its pattern of dark brown and tan blotches which become red toward the tail. The belly in white or cream colored with numerous black spots. Boas are excellent climbers and may be found in trees and cactus. Boas also hide in the leaves under bushes waiting to catch prey that pass. Boas catch their prey with their teeth and then constrict it in their coils. The Boa’s diet consists of birds, lizards, rats, mice, and rabbits. Large Boas have been known to eat small goats and chickens. When threatened, Boas will hiss loudly. Boas are a non-native species. The first Boas were reported on the island in 1999. Since that time they have been found across the entire island in all types of habitats. Source: National Park Aruba. 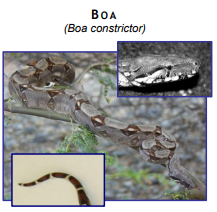