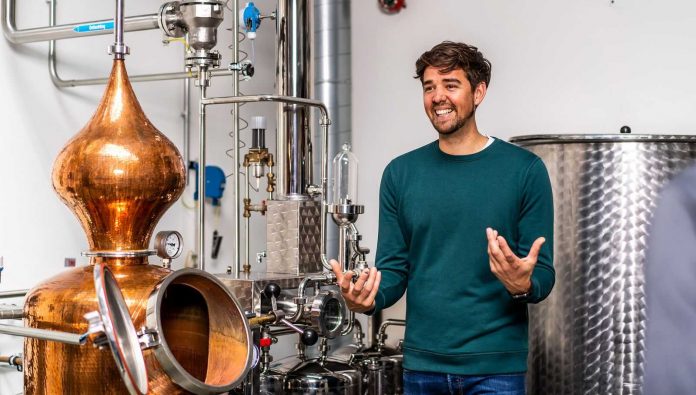 THE HAGUE, NETHERLANDS – Ruben Maduro entered the first cocktail bar four years ago with a bottle of botanical rum under his arm, and the rest is history. Today we read part 1 of this amazing Aruba adventure, stay tuned for part 2 tomorrow 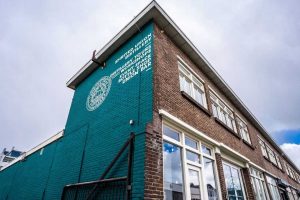 Santiago Tromp braved the Caribbean Sea at the beginning of the twentieth century. The Aruban was a sailor with a passion for rum. The glasses with the aromatic stuff that flew over the bar at that time, undoubtedly came from the barrels (Bocas) of Santiago Tromp’s ship. So, it is not surprising that his great-grandson Ruben Maduro is currently conquering the rum world. Great-grandfather Tromp is an example for Ruben, born in Breda, who produces rum in his own distillery in Amsterdam-South. Botanical rum to be precise.

Spirited Union works with rum distilleries from countries such as Panama, Belize, Barbados, Jamaica and Swaziland and distills that rum with natural ingredients. Lemons from the Italian Amalfi Coast, for example. Or pineapple of the highly regarded Queen Victoria variety. But more importantly, what Spirited Union rum doesn’t contain: get rid of those artificial colors and flavors. Spirited Union wants to conquer and reform the rum world in a natural way. It has been four years since Spirited Union was born, Ruben tells me. It was early March. There was no distillery and no money. 55 bottles of Union 55 (the predecessor of the current brand name) Spice & Sea Salt, produced in a small Amsterdam distillery. But no labels. 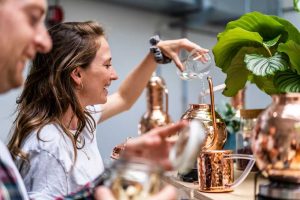 The honeymoon period: “Bizarre how your resilience is not present”

March 9, 2017 was the launch of Union 55 – referring to the 55 days that the rum has matured – must be the start of a beautiful brand that is slowly spreading across the world. Then you need a nice bottle of rum and a nice label. “The packaging has to be really top notch,” is what someone advised me. I found a top printing company in England through via. I had to tick off those labels immediately. So, I sold the first 55 bottles to friends and family for $100 each. I could pay for the labels with that money. It took until that shipment arrived and on launch day that we were notified that the labels were missing.”

“In tears, I called my brother,” It’s not going to happen! “I said dramatically. He sent a van to the border, found the container together with the postal company and tracked down the pallet. An hour before the journalists and friends and family arrived, I had the labels in my hands. You will recognize the first 55 bottles immediately, because the labels are stuck on them at an angle. I was still completely shaking. Speaking of honeymoon: mine was characterized by ultimate highs and lows.”

Not even long before that, Ruben quit his job at the Amsterdam distiller Bols. To review Ruben’s life story in a nutshell: born in Breda, raised in Aruba, then moved to London to pursue a career in the bar world. “There I was able to taste the Michelin approach to the cocktails.” Once back on the island, Ruben became frustrated with the vision of rum. “On the one hand, you had the slow tempo, sipping rum. Traditional. Do not mix, but drink pure. Old men playing dominoes in Cuba with a cigar in their mouth. Great, but also exclusive and difficult. On the other hand, there is the rum with the pirate on the label that you ram through the cola. With artificial colors and flavors. Everything that is not cool. ” What if I sit down among them, Ruben wondered, “that was the idea years ago.”

In vain he applied for a loan for his own distillery from an Aruban bank, later a new period as a London cocktail shaker also disappointed him. The blood crawled where it couldn’t go. Or in this case the rum. “During a distiller course in Scotland I found out that I knew nothing about production, supply chain, branding, fire safety and so on. He therefore learned the tricks of the trade at Bols. For that brand, Ruben traveled the world, discovered different drinking cultures. “And I saw that rum still had so much potential.” In the meantime, Ruben had earned his place at Bols and approached the master distiller. Whether he could use the boilers for his own project on his free Friday afternoons.

“Within the company, the golden cage became increasingly locked and my enterprising brain often clashed with it,” the native Bredanaar looks back. “Fuck it, I’m going to start for myself. The next two years I developed the brand and then I entered the Amsterdam cocktail bar Feijoa with a bottle under my arm. My very first rum was the Spice & Sea Salt. Focused on cocktail business, because from my experience I knew that salt enhances flavors and can create a balance between bitter and sweet. Without the bottle I walked out of the store: sold. I jumped in the air. In the beginning everything is extreme. If someone said “I like it” it was the best day of your life. But if you then heard that someone didn’t like your rum, you immediately went into a depression. Bizarre how that resilience is absent. Those first months with the bottles under my arm were without a doubt the most special time.”

That one cocktail bar with Ruben’s rum on the counter became two, then five and then ten. “We had gold in our hands. There is such a thing as the first mover advantage. We had to act quickly before others would develop this idea.” And for Ruben, the best ideas arise in the shower. “Early in the morning I am at my sharpest. I thought about the conversation I had in London, came to the office and told my then colleague: dude, we are going to open our own distillery.”

‘Take your car off the beaten track to meet our monuments...