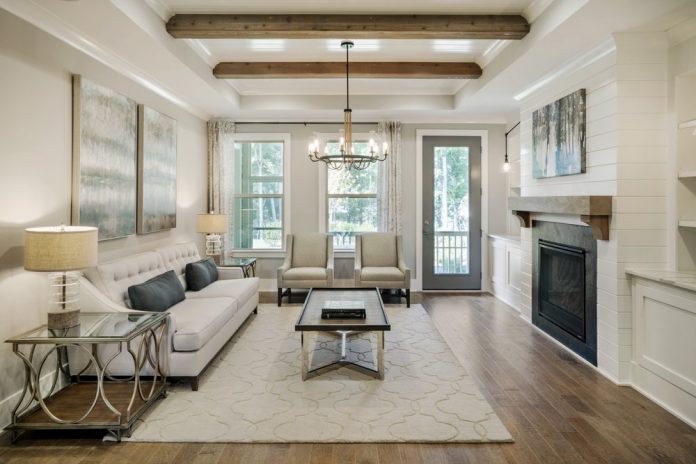 Sometimes referred to as a room’s fifth wall — often gets short shrift in decorating schemes. Walls and furnishings take center stage while the acreage overhead receives a coat of neutral white paint, with perhaps a snazzy ceiling fixture.

That wasn’t the case historically. Plaster ornamentation and murals were used centuries ago, and the Victorians really went to town on the ceiling, with elaborate moldings and stamped tin sheeting. Ceiling medallions graced more formal spaces like dining rooms and parlors, while timber beams and tongue-and-groove boards were popular in kitchens, bedrooms and common spaces. Through the early 20th century, curvy coving, paneled grids and ornate moldings were popular.

But with the advent of modernism after the 1930s, ceilings became the serene planes most of us are familiar with.

Now we’re looking up again. Designers are really getting creative with architectural elements, as well as paint, wallpaper and lighting.

“Statement ceilings are a great way to bring detail and visual interest to a room,” says Gideon Mendelson, founder and creative director of his New York-based eponymous design group. “We see them as an opportunity to create something unexpected that adds to the space.”

For one client in the New York suburbs, he’d been tasked with creating a classic white kitchen, but he wanted to add some personality.

“The client loved checks and plaids, so a decorative painter painted a green checkered design on a canvas and then installed it on the ceiling. The color matches the green on the kitchen island, so it ties the room together and makes the space feel that much more special.”

The positive reaction to that ceiling spurred Mendelson’s team to include them in other projects. “We quickly realized how impactful and powerful they can be. It immediately makes the space feel like one-of-a-kind. In almost every project we do now, there’s some ceiling treatment.”

He turned traditional Tudor style on its ear in another project by creating a modern design made of oak for the ceiling. And in a Hamptons retreat, faux-wood wallcovering from the French firm Nobilis added a beachy feel to the ceiling, punctuated with fresh Lilly Pulitzer-esque green paint.

As well as millwork and wallpaper, Mendelson’s done custom hand-painting on ceilings. “It sets it apart from the rest of the home, and gives the space its own personality,” he says.

In the same home, Coleman installed a series of architectural wood beams across the ceiling in both the dining area and a bathroom, giving the spaces a Japanese country-house vibe.

In a Roxbury, Connecticut, country home, designer Philip Gorrivan ran wallpaper up the walls and across the ceilings in several rooms, including a Cole & Son’s Fornasetti leaf print in the dining room and a storm-cloud print called Nuvolette, also by Fornasetti, in a boy’s room. Wrapping rooms in strong patterns like this creates drama, and in nurseries and childrens’ rooms can spark imagination.

Smooth-finished ceilings make it easy to apply whatever you can dream up: paint, peel and stick or traditional wallpapers, or even ornamentation like origami, decals, buttons, faux jewels, botanicals, twigs, garlands, ribbon, stencils or scarves.

Command strips will hold most lightweight objects firmly to a smooth ceiling, but if you’re stuck with one of those textured ceilings, you’ll either have to refinish it or opt for wood paneling or tin sheets.

Not ready to fully dress your ceiling? You can still add some excitement there with a light fixture.

“A ceiling statement doesn’t have to involve complicated architectural details,” points out Leigh Spicher, design studio director for the Atlanta-based homebuilding group Ashton Woods. “It can also be created by adding a chandelier that contrasts in either style or scale to the room.”

Sometimes an unexpected bonus comes from creating a statement ceiling. Chris Coleman remembers a project in Manhattan a few years ago, in a 39th floor apartment: “The husband said what do we do with the ceiling? And I said lacquer it, and they were so ecstatic when they saw the yellow taxis reflected in the ceiling.”