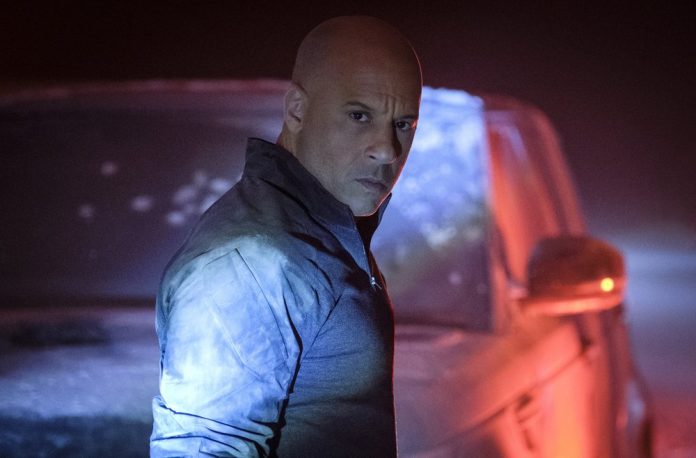 It might be too harsh to recommend practicing social distancing with the new Vin Diesel movie “Bloodshot,” but I wouldn’t want to shake its hand, either.

David S. F. Wilson’s film comes not from Marvel or DC but the pages of Valiant Comics. Its central character, a former soldier named Ray Garrison (Diesel), is brought back to life with nanotechnology that gives him superhuman strength and the ability to immediately be healed by microscopic robots. He awakes to a muscleman’s dream, lifting enormous barbells and trading a punching bag for a concrete pillar. What could be better?

Well, the downsides include the haunting memory of the murder of Garrison’s wife and the eventual realization that his creator, Dr. Emil Harting (Guy Pearce, classing up the joint), can turn him off with a switch. But when he’s in action, Garrison is something like a hulking Terminator who rapidly reassembles when shot or exploded, just without the sunglasses or snappy catch phrases.

There’s a dull thud to “Bloodshot,” a bruising action movie that can’t equal its brawn with brains. It’s a high-tech “Frankenstein” that cobbles together the sci-fi concepts of various previous movies before it. Wilson, a visual effects expert making his directorial debut, films the actions sequences in a vague, disorienting blur, sometimes slowing things down in shots of grim brutalism. One, in a darkened tunnel, is shot amid a crimson glow and a clouds of powdery white (from a flour truck). Diesel doesn’t bring any dramatic heft to the part but he makes a mean bullet of a man.

“Bloodshot” is, at least, a little more interesting than it initially appears. It begins to reflect back on itself, questing what’s real and what isn’t. Pearce’s Harting turns out to be as much a film director as a mad scientist, compiling digital worlds and plot lines for his creations. (“It was all a simulation” has officially replaced “It was all a dream” in the movies.) And there is somewhere in here a salient metaphor for the plight of soldiers returning home from war with prosthetic limbs and forced to make for themselves strange new lives.

Along the way, a few actors give it a pulse. Eiza González, as the also-enhanced KT, is compelling enough that the movie feels like it should have gravitated from Garrison to her. Lamorne Morris just about steals the movie as the brilliant but goofy coder Wilfred Wigans.

“Bloodshot” is just smart enough to be more than trash, and just trashy enough to be less than smart. It will do fine if you’re looking for a lesser simulation of a good movie.

“Bloodshot,” a Sony Pictures release, is rated PG-13 by the Motion Picture Association of America for intense sequences of violence, some suggestive material and language. Running time: 109 minutes. Two stars out of four.