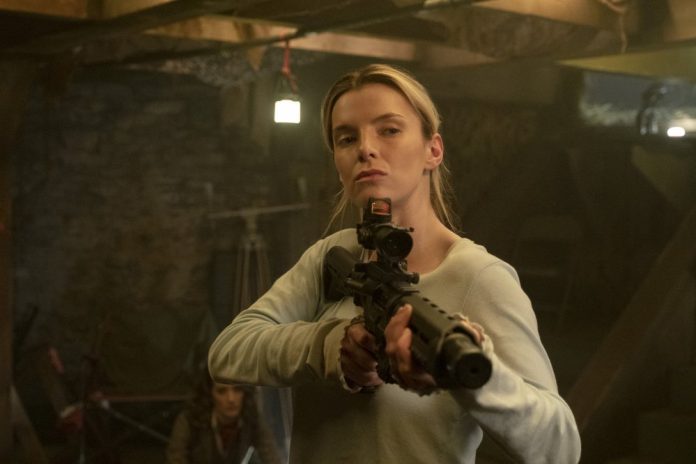 Fittingly, few films in recent memory arrive with a bigger target on its back than “The Hunt.” Our quick advice? Lower your weapons.

The horror-thriller with a healthy side of political commentary was pulled from release last summer following backlash to its trailer depicting a group of wealthy, liberal Americans kidnapping and hunting down red-state stereotypes for fun.

Some commentators — including the president of the United States — were quick to criticize the film in the wake of several mass shooting despite never seeing it, denouncing the notion of elitist Democrats brutally killing so-called “deplorables.” And, to be sure, it does depict that. But anyone who actually watches the whole film will clearly be rooting for the deplorables.

It’s not the Right but the Left that comes off far worse in “ The Hunt.” The hunters are smug, NPR-listening, kimono-wearing, caviar-eating, anti-gun killers who seek approval on Twitter from Ava DuVernay and hide their venality in humanitarian causes.

“For the record, climate change is real!” one liberal screams at a prone victim before smashing his head open. Drinking a full sugar soda is anathema for this group, who are finicky and smug. “Who has the hand sanitizer?” one asks while waiting to kill fellow Americans.

Right-wingers are mocked as well, to be sure. One character brings up the “deep state” and is convinced that a group of migrants he encounters includes “crisis babies.” Sean Hannity gets name-checked by another.

The script was written by Damon Lindelof, who created “Watchmen” and “The Leftovers,” and Nick Cuse, a writer on both projects. Craig Zobel, who directed the post-apocalyptic survivalist tale “Z for Zachariah,” takes the helm. Originally scheduled to be released in September, the film comes out now as political winds are blowing ever stronger. It really isn’t sturdy enough not to be ripped to shreds.

The filmmakers have created an uneasy and often awkward mix of murderous violence and social commentary, with one element often stepping on the other. Not many films can combine George Orwell references and a vicious stabbing with a meat thermometer. It’s all as subtle as a bear trap.

When the dust settles, “The Hunt” really stars Betty Gilpin (from Netflix’s “GLOW”) and Hilary Swank (“Million Dollar Baby”). Each represent opposite sides of the political divide. Both are smart, dangerous and resourceful.

The film starts with a dozen people waking up in what appears to be a central Arkansas clearing, deposited there by ruthless, urban sophisticates. They’ve been drugged and gagged and soon they are armed, presumably to make the hunt more exciting.

The victims bear all the markings of boilerplate blue-collar red-staters — mom jeans, work boots and vet caps, everyone grizzled and unfashionable. “We need to lean into the stereotype,” one character says during the movie and the filmmakers have done that in spades.

Most members of the hunted group never learn each other’s names and you shouldn’t get too attached either. To put it another way, actors Emma Roberts, Justin Hartley, Ike Barinholtz and Sturgill Simpson were probably paid by the hour.

Mayhem ensues as the group is picked off one by one, until Gilpin’s character emerges as the film’s gutsy heroine and takes the film by the scruff of its neck. “The Hunt” later ham-handedly tries to explain why the dozen victims were selected and then switches to the viewpoint of the six hunters, who — thanks to a calm and efficient Gilpin — are becoming the hunted.

The concept of hunting humans for sport has a long history, stretching back to Richard Connell’s 1924 short story “The Most Dangerous Game.” It’s reliable grist for movies exploring the divide between rich and poor, most recently in “The Hunger Games” franchise and last year’s “Ready or Not.” This time, the divide is exacerbated by the left-right divide the movie itself has added.

A satirical feature film is hard to pull off and the filmmakers here have learned that a trailer for a satirical film is even harder. The balancing act is subtle for both and context is crucial. Jonathan Swift, one of the best at poking fun at society, called satire a tricky mirror where you see what you want: “Satire is a sort of glass, wherein beholders do generally discover everybody’s face but their own.”

“The Hunt” is not great satire or even a great film. It’s an unstylish and heavy-handed horror-thriller that turns into a revenge gore-fest as it mocks everyone with a big clumsy paw. It balks at making any grand conclusions about the state of America or how to heal our divisions, unless there’s a message in the red-state character played by Gilpin cauterizing her torso wound with a high-end, blue-state kitchen torch.

Toward the end, “The Hunt” warns us to be careful not to jump to conclusions about others or believe in dark internet conspiracies. That’s supremely ironic, given what happened to this film. Anyway, it’s too late. These are not healthy days for satire, no matter how clownish.

“The Hunt,” a Universal Pictures release, is rated R for strong bloody violence and language throughout. Running time: 90 minutes. Two stars out of four.

Bocelli: It’s not a concert for coronavirus, it’s a prayer