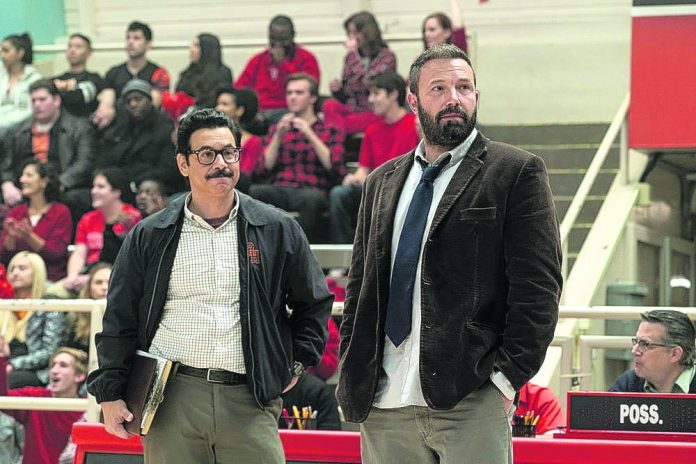 There is nothing particularly extraordinary about director Gavin O’Connor’s “ The Way Back,” except perhaps for Ben Affleck’s performance. This is a quiet drama about a lonely alcoholic who gets a lifeline when he’s asked to coach a high school basketball team. It’s the kind of movie people like to say “Hollywood doesn’t make anymore,” which is only partly true. It’s also the kind of movie you might feel like you’ve seen before (also partly true).

Affleck plays Jack Cunningham, a lumbering, middle-aged man who drinks all day, every day. He cracks open a can in the shower. He pours a little something into his coffee tumbler at his construction job. He drinks on the drive to the bar. He drinks in the bar. The next day he repeats the cycle all over again.

He’s what you might call a functioning alcoholic, although this state of drifting through life in a booze-addled daze doesn’t make him happy. He’s merely surviving in his sad, dirty apartment until he gets a phone call from his past: The head of his old high school, Bishop Hayes, wants him to come back to the place he once ruled as an all-star player to coach their currently less-than-glorious basketball team.

It’s exactly what you’d expect, but the scenes with the team are some of the best in the film — funny and spirited and wholly engaging — even if they do seem ripped from the playbook. But “The Way Back” doesn’t fancy itself a typical sports drama. It’s attempting to be more than that with a lot of threads and side plots that never quite develop to any satisfying end.

The basketball isn’t the focus. Jack is. And this is a guy who’s got a lot of ghosts that the movie takes its time to reveal. The script from Brad Ingelsby and O’Connor withholds a fair amount, perhaps to make “The Way Back” a more accurate reflection of how often people’s past troubles come up in everyday life. But in retrospect, there’s a nagging sense that it was just done for a cheap punch in the gut.

Or perhaps that’s too cynical. “The Way Back” does seem to have been constructed with an earnest spirit, and Affleck carries the film well on his larger-than-usual shoulders, capably showing all sides of a down-on-his-luck alcoholic — the funny, the sweet, the explosive and the self-destructive. It’s chilling to see the light go on in his eyes with a drink, and the moment when it goes out too.

“The Way Back” is a promising move forward for a star who has always respectably skipped between genres. Still, it’s not as compelling as Affleck’s recent interviews about his own struggles, interviews characterized by honesty and specificity.q

Affleck has it in him to use his personal experiences to make a great drama, whether writing, directing or acting, but “The Way Back” isn’t it.

R Kelly charged with paying bribe before marriage to Aaliyah

IndyCar to have two female racers in Road America field