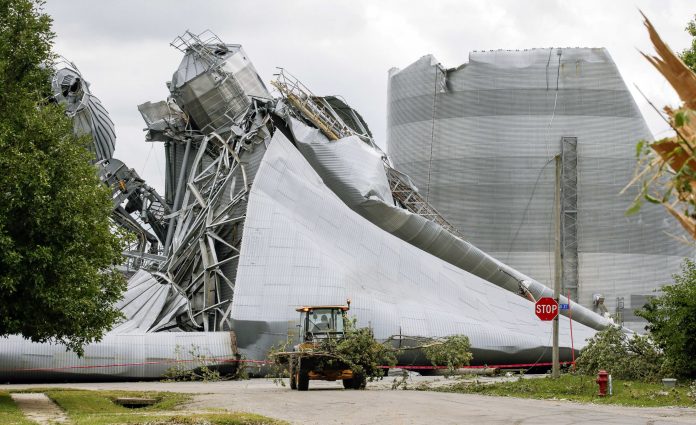 Damage estimates from a rare wind storm that slammed Iowa and some other parts of the Midwest in August are growing, with the total now at $7.5 billion, according to a new report.

The Aug. 10 storm hit Iowa hard but also caused damage in Illinois, Ohio, Minnesota and Indiana. The National Oceanic and Atmospheric Administration said it’s currently the second-costliest U.S. disaster so far in 2020, although cost estimates for widespread wildfires along the West Coast aren’t yet available.

The storm, known as a derecho, generated winds of up to 140 mph (225 kph) that flattened millions of acres of crops. The derecho also knocked out power to half a million Iowa residents and damaged homes, trees and power lines. Four people died as the storm moved across the Midwest.

The most expensive disaster so far this year was Hurricane Laura, which caused $14 billion in damage when it hit the Gulf Coast in August, according to the NOAA research.

National Weather Service meteorologist Allan Curtis told the Des Moines Register that the derecho caused such extensive damage because it lasted for roughly 14 hours and hit crops when they were especially vulnerable. He said the damage would have been significantly less if the derecho had occurred in the spring, before crops were tall enough to be caught by the wind.

“If you were looking to exert the most damage on corn crops when it comes to thunderstorms and heavy winds, when the derecho rolled through in August, it was the perfect time to do it,” Curtis said.

The U.S. Agriculture Department has estimated that Iowa farmers will be unable to harvest at least 850,000 acres (343,983 hectares) of crops this fall because of the damage.