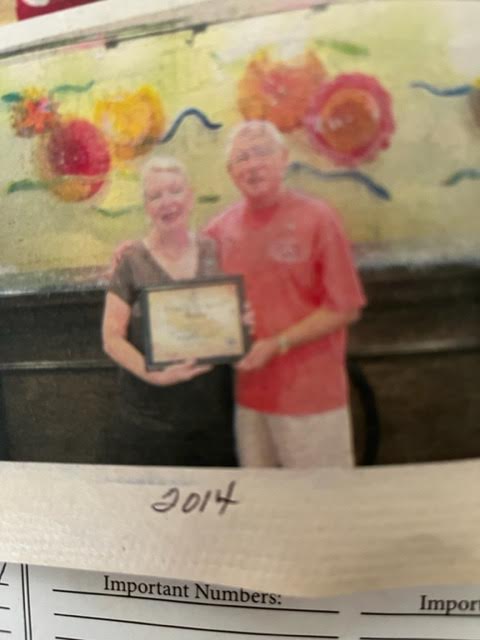 Renee Servello is full of life, laughter and love for Aruba. And now, she is ready to share this with the world. Her latest book, Humor All The Way, contains humorous stories that prove that laughter is the best medicine.

We spoke with Servello this week, during her 27th visit to the island, and she told us how it all started. “Initially we came on a package deal and we stayed at La Cabana, for two years”, she says. “The second year we were at La Cabana, we were reading the newspaper and it said that the Marriott hotel was opening up the next day, it would be the first day.” Because Renee and her husband Anthony are Marriott members, they dashed to the place and met Scott, the general manager overseeing the construction of the hotel, and he gave them a tour. There was an old frame of a building abandoned nearby, “and so we took Scott outside and we said ‘Scott, get a timeshare over there!’, and this is the timeshare that they built”, she said referring to the Marriott Ocean Club.

“Through the years we’ve met a lot of the employees, and we’re still friends with a lot of them”, Renee commented. “One of them, she married a Dutchman here, they went to Holland and then we visited them in Holland. You can’t get rid of us Servellos!” she said with a laugh. “We’re real good friends with Annie Theophile who runs room service in the hotel.” The day we met, they were going out for lunch with Annie.

What makes Aruba so special for Renee is her special relationships with the people. “You can go to other islands, but the people are not that friendly. You hear everybody say that Aruba is a friendly island, but it really is. We travel a lot, and it’s really friendly! This is like home for us.”

Renee sees humor in everything, and probably, she will write it down. Anthony told us that their drawers at home are filled with cards on which Renee writes funny stories, which eventually resulted in her second book, Humor All The Way. However, she worked in retail for 30 years, “and therefore I couldn’t focus on what I love”, she said. “But I would write, when I was travelling for my job, on the plane, I would write down funny things I had seen, and crammed them in drawers for years. And then in 2017, I said to Anthony ‘enough! I feel like writing down some of the stupid things that make me laugh’, so I started writing again, and thought, this might make a book”. That went well, but her publishing company was not very good with marketing. One day, “out of the blue”, a company from San Diego got in touch with her, and “they wanted to pursue my second book”. They believed that the book could do better with some marketing, and so she went with them a year ago.

She has been travelling the U.S. doing book signings, and her book is available in various countries in North America, Europe, Australia, New Zealand, Japan, and most recently, Colombia. “These little books are travelling, they’re busy!” And now, her company Readers Magnet “is like family to me”, and she calls them her “power rangers”.

Whenever she takes vacations, Renee is in the habit of writing a synopsis of the adventures and happenings during the trip, no matter the length of the vacation. “Of course I embellish, I make it very funny. But there have been so many stories during the years, I can keep writing. In fact, my company wants to bring a series out of [my book].” The second book in the humor series, “Humor Never Takes A Break”, is coming out next. “It just goes on and on and on!”

Renee’s philosophy is that humor is the medicine for life. “In my head, that’s what helps you along. I’m not Polyanna. Everyone has losses in their life. Even me, I lost my father at 4”, she says. However, she believes on focusing in the little positive, funny and uplifting moments in life. “I’m not laughing at anybody who has loss or illness, because we all have that in our families and in our lives. However, if you can, find something to laugh about. It helps you”, she added. “I think it helps your body if you can laugh and enjoy life a little bit.”

Can you top this? Jeff and carla Climb the hooiberg 6...