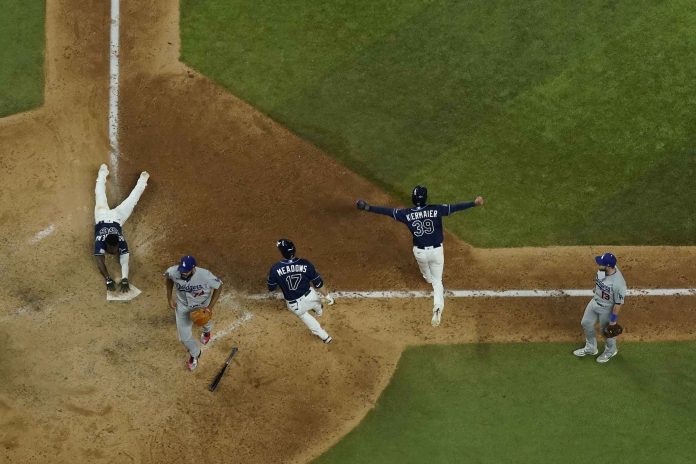 It was improbable enough that little-known Brett Phillips would get the big hit for Tampa Bay against Dodgers All-Star closer Kenley Jansen. What followed was outright inconceivable.

Phillips’ tying single with two outs in the ninth inning turned into a game-ending hit when the Los Angeles Dodgers dropped the ball twice, allowing Randy Arozarena to stumble home as the winning run in the Rays’ 8-7 victory in World Series Game 4 on Saturday night.

It was undoubtedly one of the wildest endings in World Series history. Arozarena tripped and fell on his way home and had begun retreating to third base when catcher Will Smith misplayed a relay feed. Arozarena about-faced and dived toward home, pounding on the plate with a big smile while Phillips burst into tears in the outfield.

Walk-off homers are one thing — think Kirk Gibson, Carlton Fisk and Bill Mazeroski, among many others. But a finish this wacky has only a few precedents in World Series history.

Some more memorable, unimaginable endings from Series past:

Babe Ruth was already the most fearsome slugger baseball had ever seen when he stepped to the plate in the bottom of the ninth inning, his mighty Yankees trailing the Cardinals 3-2.

With two outs, Hall of Famer pitcher Grover Cleveland Alexander took no chances and walked Ruth, bringing cleanup man Bob Meusel to the plate — Lou Gehrig was up after that.

Ruth decided to try to force the action and took off, and was thrown out by catcher Bob O’Farrell. It was the only time a World Series ended with a caught stealing.

Bill Bevens went 7-13 for the Yankees in the final season of a brief major league career, then got the start at Ebbets Field. In the biggest game of his life, he was all over the place, walking a record 10 batters.

But he was effectively wild, too. Because with two outs in the bottom of the ninth inning, Bevens was somehow still pitching a no-hitter and holding a 2-1 lead. That’s when aging, popular Dodgers All-Star Cookie Lavagetto stepped up and launched a double off the right field wall, scoring two runs and ending Bevens’ bid for a most unlikely no-hitter.

It was Lavagetto’s last hit as a big leaguer and tied the Series at 2-all. Bevens pitched just once more in the majors, tossing shutout relief in Game 7 as the Yankees won another title.

The error came after Boston scored twice in the top of the inning, only to let New York tie it on Ray Knight’s RBI single and a wild pitch by Bob Stanley. The score was knotted at 5 when Buckner let Wilson’s dribbler go by, bringing the winning run around and setting the stage for the Mets’ Game 7 victory.

The Red Sox — at the time still plagued by the Curse of the Bambino — didn’t win a World Series until 2004.

The game was tied at 4 with one out in the bottom of the ninth when second baseman Dustin Pedroia dived for a grounder and threw out Yadier Molina trying to score from third. Catcher Jarrod Saltalamacchia then fired wildly trying to catch Craig at third, and Middlebrooks tripped Craig after trying to catch the ball. Craig scampered home and appeared to be thrown out before either side realized Joyce had made the obstruction call.

The win put St. Louis up 2-1 in the Series, but Boston won the next three games for their third championship in a 10-year span.

Before the Cubs could end their 108-year title drought, they had to wait out a 17-minute rain delay.

Chicago led 6-3 when All-Star closer Aroldis Chapman entered with two outs in the eighth inning. Brandon Guyer greeted him with an RBI double and Rajai Davis followed with a stunning two-run shot to tie it.

Both teams went scoreless in the ninth, and the grounds crew rolled out the tarp before they could begin the 10th. Jason Heyward delivered a fiery speech to his Cubs teammates during the delay, and they responded with two runs when play resumed.

Cleveland threatened in the bottom of the 10th, with Davis driving home a run to cut the deficit to 8-7, but Michael Martinez then grounded out to third baseman Kris Bryant to end the game — and decades of woe for fans on Chicago’s North Side.