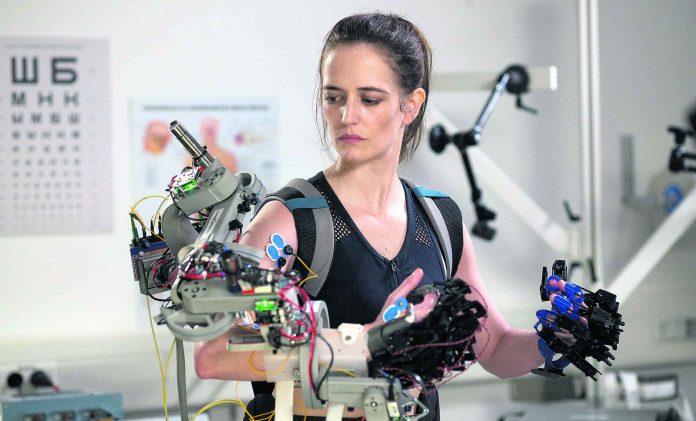 Movies about astronauts and space are so often also about estranged fathers and sons. So it’s a welcome respite that in the new film “Proxima,” now available to rent on demand, the focus is on a mother, played by Eva Green, and her grade school age daughter, Stella, who she must leave behind for the opportunity to go to space.

It’s a subtle yet powerful film from French director Alice Winocour and many have singled out Green’s performance as one of her best.

The Associated Press spoke to Green about the big issues “Proxima” addresses, from the guilt of being a working mother to sexism, and also how fun it is to play an astronaut. Remarks have been edited for clarity and brevity.

AP: What did you find interesting about this story?

Green: I thought it was an amazing love story. The connection that my character and her daughter have is very beautiful and very powerful. And to play a character who is constantly torn between her passion of being an astronaut and her love for her daughter was very appealing. And playing an astronaut is like a fantasy! It’s very empowering. I love doing research on stuff like this. It was a good excuse to explore this world, which was completely unknown to me.

AP: The motherhood and work conundrum is a big one that this film tackles with a lot of nuance and empathy.

Green: I think lots of women will identify with this. And I don’t know if the movie gives an answer, but lots of women are faced with the dilemma of having a high powered career or having a family. And it’s always a bit taboo. It doesn’t look very good to kind of abandon your children. I think this movie also encourages women that it’s OK to be ambitious and to go against conventions and to pursue your dream. But there is always that enormous feeling of guilt, which is absolutely human and very complex.

AP: Was it personal for you or your director?

Green: (Alice) actually has a daughter who is the exact same age as the actress who plays Stella. So it came from her guts, this project. Even me, I don’t have children and I understand this internal conflict. On another level, I have a dog and it is a big deal to leave him and do something for work.

AP: Was this something you talked to your mother (actor Marlène Jobert) about?

Green: We talked more about the fact that she was an astronaut and how cool it was. But I have a twin sister, and when we were born, my mom really slowed down her career to raise the kids.

AP: How did you prepare to play an astronaut? Did you get to meet any?

Green: Alice is very nerdy, a bit like me. She does lots of homework and she really wanted me to meet some astronauts and to go to the training center in Cologne and to train with some of the real trainers, Russian trainers in particular, one who was quite harsh on me because obviously I know nothing about being an astronaut. But it was quite comical.

It’s amazing to see how passionate those guys are. They go back home and they work, work, work, work, work. When we were in Moscow at Star City there was this sense of loneliness. And sometimes I was like, ‘Oh my god, poor them!’ They have absolutely no life! But they love it. They love that sense of sacrifice and dedication for science. We met several French astronauts and we were like touching something sacred almost. There is something saint-like like about astronauts. They feel like they’ve seen the unknown. So it was a real treat.

AP: The film also explores the sexism she experiences at work. Did that ring true to what you saw?

AP: What was one of the most memorable things about this experience?

Green: What was very exciting was the travel to those very sacred places, like Star City. For me, my favorite thing ever was a military plane — you needed the visa and all of this and I felt I was entering another dimension like in “Star Wars.”

What makes an American a patriot? Spike Lee has some answers