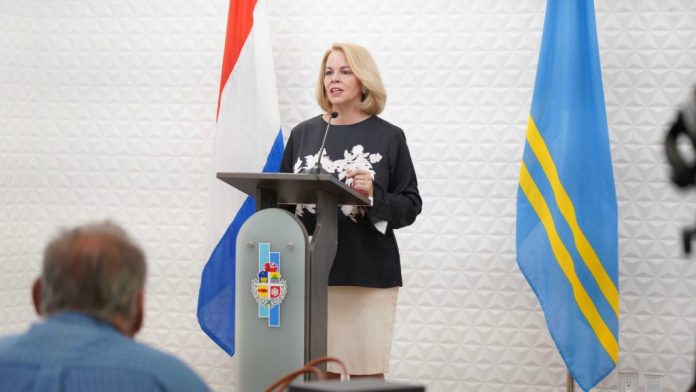 Recently, media in the Kingdom of the Netherlands reported that the prime ministers of Aruba, Sint Maarten and Curaçao will be meeting with Dutch Secretary of State for Kingdom Affairs, Alexandra van Huffelen this month in Sint Maarten, to dialogue on the democratic deficit within the kingdom.

Wever-Croes explained that on the agenda for this meeting there is the topic of democratic deficit, which is a topic on which they have already been discussing widely, seeing how there is a democratic deficit when it comes to making decisions within the kingdom of the Netherlands.

For Aruba, the prime minister indicated that they began already before this, with consultations with different organizations and stakeholders in the community, and they began receiving their input also on what they see as the democratic deficit and how this could be eliminated or minimized.

Wever-Croes commented that based on all the input and contributions that they are receiving, and they will continue receiving before the 12th of January when the dialogue will begin, they will fix Aruba’s position; she said this is because it’s not only important what the government things, but also what stakeholders think is important.

“We asked for the opinion and input of the Parliament of Aruba, we asked the University of Aruba, the Foundation for Good Governance, and based on that, we are fixing our position”, she indicated.

The prime minister emphasized that it is a fact that there is a big democratic deficit within the kingdom of the Netherlands, but for Wever-Croes it is very important that during the meetings on the 12 and 13 of January in Sint Maarten, each prime minister indicates the expectations of each country regarding this topic.

She mentioned that she has heard some countries saying that the democratic deficit is eliminated completely when a country, for example in Curaçao, has the same voice as the Netherlands; and the Netherlands said that this would never happen, because the Netherlands represents more inhabitants than Curaçao. “This means that it is important for each of us to have our expectations well defined, because otherwise, the deliberations become a failure”, she underscored.

She added that for Aruba it is also very important – and she indicated that they have already expressed this in writing – that perhaps the democratic deficit cannot be eliminated in the short term, but it is important in any case to begin with a decent dispute resolution, appropriate, in which Aruba can feel that if there is a dispute with the Netherlands there is an arrangement giving the island the right to be represented fairly and fight their case.

It is also expected that the draft for the kingdom law for consensus for the establishment of the Caribbean Body for Reform and Development (COHO) will be on the agenda. The version submitted by the Netherlands met with strong resistance, which is a reason why Aruba, Sint Maarten and Curaçao are sending alternatives.

Prime Minister Wever-Croes indicated that regarding the topic of COHO, it is the case that indeed during the last meeting of administrative consultation in June last year, which took place here in Aruba at a moment when Secretary of State Van Huffelen and the prime ministers of Curaçao and Sint Maarten were also on the island, it was agreed that the countries of Aruba, Curaçao and Sint Maarten would prepare an alternative for COHO.

She said that Aruba already prepared an alternative in the form of a mutual arrangement, and that now the Netherlands, during the meeting next week, will give its commentary on the mutual arrangement presented by Aruba, Sint Maarten and Curaçao, on which there is consensus.

A Mural in the making in San Nicolaas