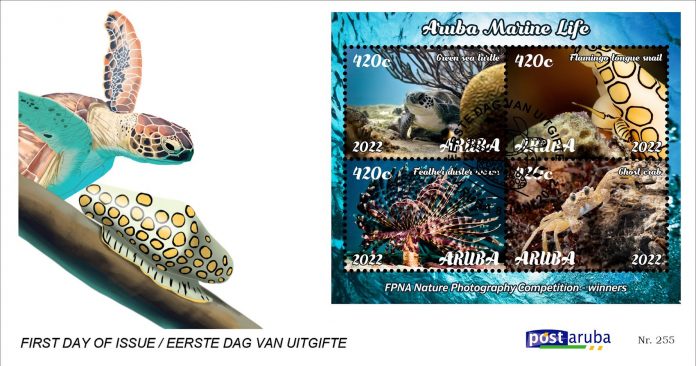 On June 8, 2021, which is World Oceans Day, Post Aruba N.V. emits its stamp series ‘Marine Life’. This emission was done in collaboration with Aruba National Park Foundation through a nature photography competition held in December 2021.

This stamp emission is accompanied by a First Day Cover envelope that was designed by Mr. Armando Goedgedrag.

Description of the stamps:

Locally turtles are probably the most popular find for divers and snorkelers. This sea turtle was resting in a coral bed on a known feeding ground for turtles; Arashi Reef. The key to approaching a turtle without disturbing it is a slow and low approach, breathing out slowly not to create any noise and minimizing movement. The turtle is framed with her natural protection surrounding her, and the coral on top of her like a symbolic crown to her beauty.

The green sea turtle live throughout tropical and subtropical seas around the world, with two distinct populations in the Atlantic and Pacific Oceans, but it is also found in the Indian Ocean. Globally, the largest populations of sea turtles are in the Great Barrier Reef in Australia, and the Caribbean Sea.

Green sea turtles have a relatively slow growth rate because of the low nutritional value of their diet. Body fat turns green because of the consumed vegetation. Their serrated jaw helps them chew algae and sea grasses. Most adult sea turtles are strictly herbivorous.

Like other sea turtles, green sea turtles migrate long distances between feeding grounds and hatching beaches. Females crawl out on beaches, dig nests, and lay eggs during the night. Later, hatchlings emerge, and scramble into the water. Those that reach maturity may live to 90 years in the wild.

It is listed as endangered by the IUCN and CITES and is protected from exploitation in most countries. It is illegal to collect, harm, or kill them. In addition, many countries have laws and ordinances to protect nesting areas. However, turtles are still in danger due to human activity. In some countries, turtles and their eggs are still hunted for food.

Title: “Face” of a Flamingo tongue

The flamingo tongue snail is a species of small but brightly colored sea snail, that live in the tropical waters of the western Atlantic Ocean, in the Caribbean Sea, the Gulf of Mexico, and off the Lesser Antilles.

The flamingo tongue snail feeds by browsing on the living tissues of the soft corals on which it lives. Adult females attach eggs to coral which they have recently fed upon. After roughly 10 days, the larvae hatch.

Alive, the snail appears bright orange-yellow in color with black markings. However, these colors are not in the shell, but are only due to live mantle tissue which usually covers the shell. The mantle flaps can be retracted, exposing the shell, but this usually happens only when the animal is attacked.

This species used to be common, but it has become rather uncommon in heavily visited areas because of over collecting by snorkelers and scuba divers, who make the mistake of thinking that the bright colors are in the shell of the animal.

King’s Day with a shadow on the crown