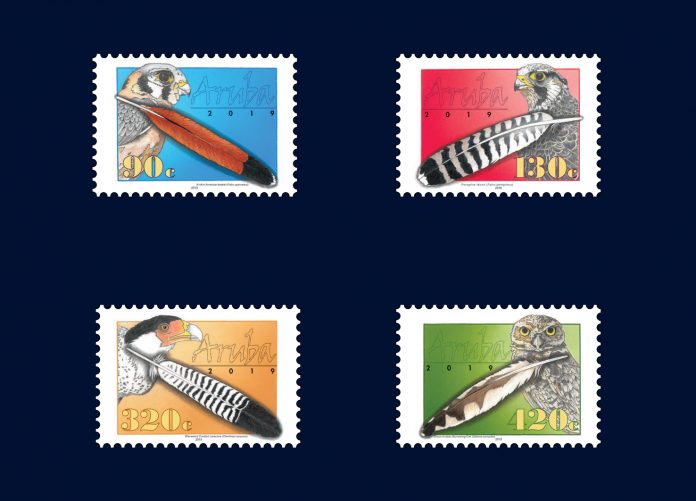 The stamps are designed by Mr. Eduardo Valbuena, and are printed by the Johan Enschedé Security Print.

American kestrel (Falco sparverius).
The American Kestrel is the smallest and most common falcon in North America. It has a roughly two-to-one range in size over subspecies and sex, varying in size from about the weight of a blue jay to a mourning dove.

In addition to requiring open space for hunting, American Kestrels need perches for hunting from, cavities for nesting (either natural or man-made), and a sufficient food supply.

Both sexes have a rufous back with noticeable barring. Its plumage is colorful and attractive, and juveniles are similar in plumage to adults.

The American kestrel usually hunts in energy-conserving fashion by perching and scanning the ground for prey to ambush, though it also hunts from the air. It sometimes hovers in the air with rapid wing beats while homing in on prey. Its diet typically consists of grasshoppers and other insects, lizards, mice, and small birds (e.g. sparrows). This broad diet has contributed to its wide success as a species. It nests in cavities in trees, cliffs, buildings, and other structures. The female lays three to seven eggs, which both sexes help to incubate.

The American kestrel is a common bird with proper training and weight control many American kestrels become effective hunters of birds in the size range of sparrows and starlings, with occasional success against birds up to approximately twice their own weight.

Peregrine falcon (Falco peregrinus).
The Peregrine is a large and powerful falcon. It has long, broad, pointed wings and a relatively short tail.

It is blue-grey above, with a blackish top of the head and an obvious black ‘moustache’ that contrasts with its white face. Its breast is finely barred. It is swift and agile in flight, chasing prey. They prefer wide-open spaces, and thrive near coasts where shorebirds are common, but they can be found everywhere from tundra to deserts. Juveniles are heavily marked, with vertical streaks instead of horizontal bars on the breast.

They occasionally steal prey, including fish and rodents, from other raptors.

Juveniles are heavily marked, with vertical streaks instead of horizontal bars on the breast.

Crested Caracara (Caracara cheriway).
The crested caracara is about the same size as an osprey, but it has shorter wings. It has a length of approximately 53 to 58 centimeters, with a wingspan of approximately 1.2 meters. Caracaras can be identified by their long yellow legs, and their large, hooked, bluish bill. Caracaras have black crowns and crests, with red facial skin. Their tails are banded, alternating black and white, with a wide black terminal band. The ends of the primaries and at the base of the neck are also banded. Immature birds appear similar, but their coloring is duller overall. Both sexes of the birds are similarly plumaged.

Bonds between adult caracaras are strong, persisting until one of the mates dies. Together, the pair of Caracaras will maintain a large territory. The nesting site is usually in a cabbage palm tree, and the nest is a bulky structure made with slender vines and sticks. The breeding season for Caracaras is from January to March, and the usual clutch being two or three eggs. Incubation is about 32 days, and the young do not leave the nest until they are at least eight weeks old. The family of Caracaras can be observed together for at least three months after the young fledge. There is usually only one brood, but two are not unusual.

Burrowing Owl (Athene cunicularia arubensis).
This small ground-dwelling Owl (20 cm) also called “Shoco” is endemic for Aruba. This small, pale buffish-colored owl with lighter spots is unmistakable because of its large round yellow eyes, prominent white eyebrows, long legs, short stubby tail, and a flat facial disc typical of the owl family and lacks ear tufts.They use their remarkably long legs to dig burrows (up to a length of 4 meters! ) for nesting and sleeping. Although they are expert diggers they sometimes do it the easy way and use discarded construction pipes as a nesting and resting place.

Nesting season begins in late March or April. Occasionally a male will have two (2) mates.

Clutch size 1- 5 eggs. Burrowing Owls are often active during the day, although they hunt for food at night. They hunt during a 24-hour period especially when they have the young to feed.
They feed on large insects and rodents which it typically hunts for from the ground, walking, hopping or running after it. It is known on occasion to locate prey from a high perch and they use their talons to catch their prey, such as large insects in the air.
They are often found sitting close to the nest entrance, winking comically at any intruder and bobbing up and down, bending their long legs. Finally they will fly away and find a safer place on top of a cactus or large boulder.

The Burrowing Owls are very vocal, and have a wide range of different calls. They make a tremulous chuckling or chattering call.

The Shoco can be found among the gigantic boulders of diorite, characteristic for parts of Aruba.

They live on the ground in between and underneath the stones.

The Shoco also live in Arikok Nacional Park. They can be found alongside a mostly dry riverbed and in the tonalite area in the southern and western part of the park. Not only is the Shoco found in the countryside, but also amongst people within highly developed areas.

Aruban Burrowing Owl’s population has greatly diminished and is now endangered, with estimates of less than 200 pairs remaining. Threats include over-development and the invasive boa constrictor. Efforts are being made to ensure that it does not go extinct.
The ‘Shoco’ was made one of Aruba’s National Symbols on February 2012. It also appears on Aruba’s Postal Stamps and Currency.
The year 2012 was declared to be the year of the ‘Shoco’ and for the Aruban Burrowing Owl to be nominated as Aruba’s National Bird. The island’s terrestrial protected area, Parke Nacional Arikok, is also an important refuge where the population can recover and the staff is actively involved in conservation efforts.

These stamps will be available at all the Post Office locations, namely in Oranjestad, San Nicolas and

Make sure that you have this set in your collection as the stock is limited.

For more information on the “Feathers 2019” issue, please contact the Philatelic Department at 528-7678 / main office located at J.E. Irausquinplein # 9, Oranjestad or visit their Facebook page: Aruba Stamps and Webpage: postaruba.com.