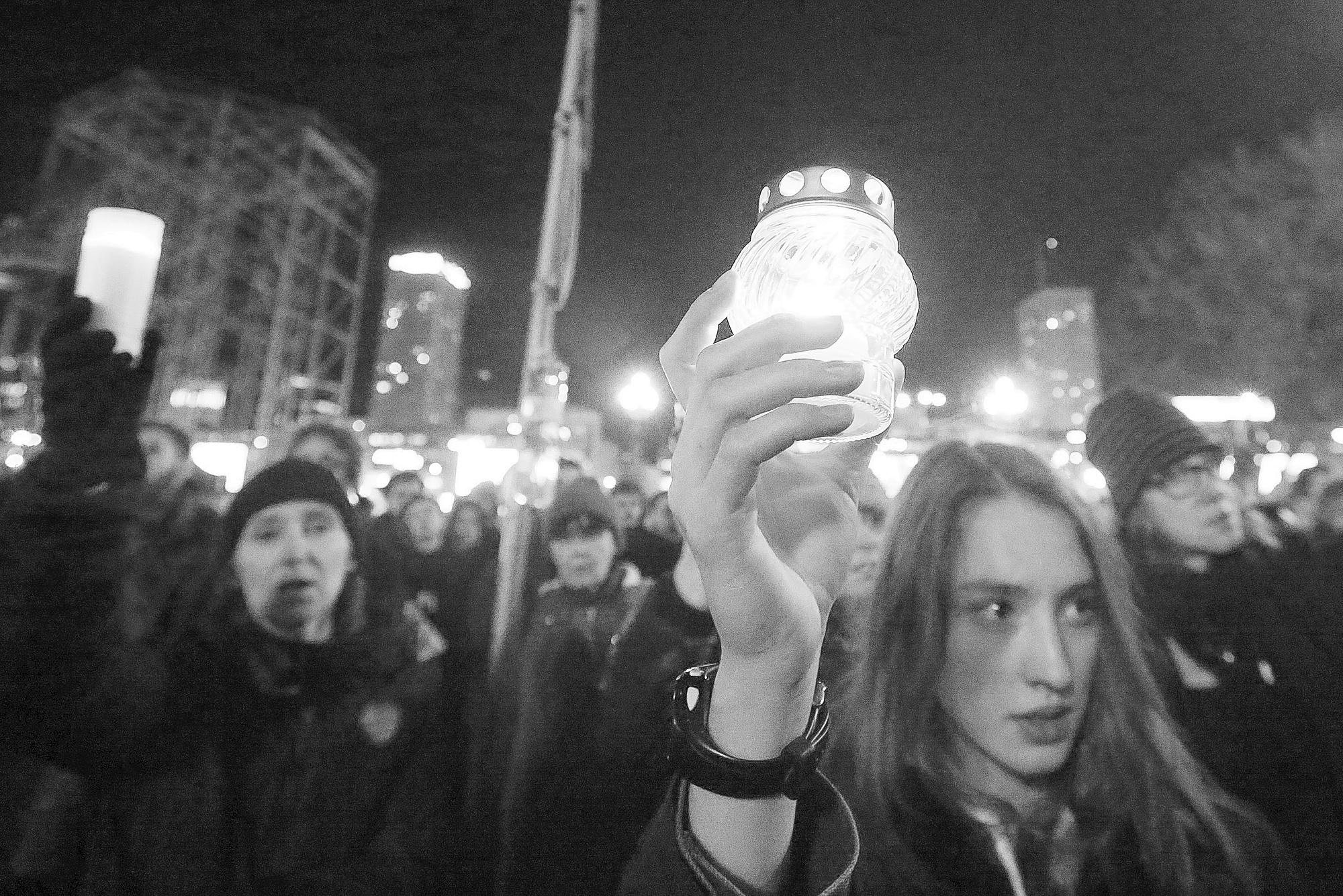 The popular liberal mayor of Poland’s port city of Gdansk died Monday after being stabbed at a charity event by an ex-convict with a history of violent crime. The killing plunged the politically divided country into shock and grief and brought Poles into the streets for solemn vigils in a rare show of national unity.

Pawel Adamowicz, 53, died from the wounds inflicted by a 27-year-old man who stormed onstage Sunday evening while the mayor was addressing an audience during the “Lights to Heaven,” the finale of a nationwide fundraiser for sick children.

Adamowicz had just expressed gratitude to the “generous” crowd, adding: “This is a wonderful time of sharing good things. You are dear. Gdansk is the most wonderful city in the world. Thank you!” That’s when the assailant rushed up and stabbed him three times, then grabbed a microphone to tell the audience that he acted in revenge against the country’s main opposition party, Civic Platform, which Adamowicz was a member of for many years but left it in 2015. With the music still playing and pyrotechnics erupting onstage, the attacker told the stunned crowd he had been wrongly imprisoned under a Civic Platform-led government.

“I was jailed but innocent. … Civic Platform tortured me. That’s why Adamowicz just died,” he said.
Adamowicz was taken to a hospital, where doctors struggled to save him, but a five-hour operation and blood transfusions were not enough, given the gravity of the injuries. The assassination comes while the nation is torn by bitter political divisions that are similar in many ways to those in the United States. The right-wing ruling Law and Justice party faced accusations that a hostile atmosphere against Adamowicz and other liberals has created fertile ground for violence. Government officials pushed back against that accusation, strongly denouncing the attack and stressing the assailant had a history of violent bank robberies. Identified by authorities only as Stefan W., he was arrested and charged Monday with murder.
Deputy Chief Prosecutor Krzysztof Sierak said there were questions about the mental state of the attacker, who used a 14.5-centimeter (5.5-inch) knife on Adamowicz, and that two psychiatrists will examine him. He had served 5½ years in prison and was released toward the end of last year.

President Andrzej Duda, who is aligned with the ruling party, opened a news conference with a minute of silence and said a day of national mourning will be observed when Adamowicz’s family holds his funeral, which was not yet announced. He is survived by his wife and two daughters. Duda called Adamowicz a “truly great human being, a great politician and great resident of Gdansk,” and denounced the attack as an act of unimaginable evil. Ruling party leader Jaroslaw Kaczynski, Poland’s most powerful politician, expressed his “great pain” and solidarity with Adamowicz’s family. In the evening, solemn vigils were held in Gdansk, Warsaw and other cities. Many carried candles in glass jars and some used cellphones to produce flickers of light, an apparent reference to the “Lights to Heaven” event where Adamowicz was attacked. In Warsaw, the capital, some held a big banner reading “Stop Hate.”

Donald Tusk, a founder of Civic Platform who was prime minister when the attacker was imprisoned and who is now president of the European Council, joined mourners in Gdansk, also his hometown. “I want to promise you today, dear Pawel, that for you and for all of us, we will defend our Gdansk, our Poland and our Europe from hatred and contempt,” Tusk told the crowd. The city flag was lowered to half-staff and Masses were held in Gdansk, Warsaw and elsewhere. Many people in Gdansk had donated blood for Adamowicz, with some saying they were given time off work.

Adamowicz was part of the democratic opposition formed in Gdansk under the leadership of Lech Walesa during the 1980s. After leaving Civic Platform, he was re-elected to a sixth term as an independent candidate in the fall. As mayor, he was a progressive voice, promoting sex education in schools and tolerance for LGBT people and minorities. He showed solidarity with the Jewish community when the Gdansk synagogue had its windows broken last year, strongly denouncing the vandalism.
The World Jewish Congress said it was in shock and mourning. “He was a true friend of the Jewish community, speaking loudly and clearly against antisemitism in Poland,” it said. Adamowicz also advocated bringing wounded Syrian children to Gdansk for medical treatment, but the plan was blocked by the Law and Justice government. After he took that stand, a far-right group, the All-Polish Youth, issued what they called a “political death notice” for him.

Government critics said they believed the violence could be partly traced to the animosity voiced against Adamowicz by some ruling party officials, which at times was carried on state TV, as well as by extremists from other groups. The assassination also initiated some soul-searching about whether security is as stringent as it should be in a country where most people enjoy a general sense of safety. The assailant got access to the stage using a media pass. Adamowicz often mingled freely with the public and had been on the streets Sunday raising money for the charity, along with volunteers across the country. Following the killing, Jerzy Owsiak said he was resigning as head of the Great Orchestra of Christmas Charity but would continue to work with the organization, whose primary mission in its 27 years of existence is to buy modern equipment for pediatric wards in cash-strapped state hospitals.
Owsiak said he himself has been the target of threats and hate messages, including by some right-wing lawmakers, but that he is not receiving any help from the police.

He told a news conference that recently levels of public criticism is “touching on Nazi, fascist language.”
The last politically motivated attack in Poland was in 2010 in Lodz when a man shouting that he wanted to kill Kaczynski fatally shot an aide to one of the party’s European Parliament lawmakers. Kaczynski, at the time an opposition leader, blamed the attack on an “atmosphere of hate” under Civic Platform.q

Haitians in Mexico see bleak choices as they seek protection