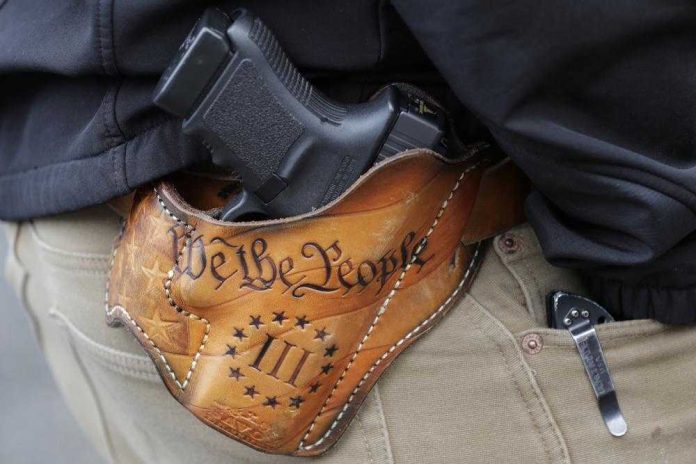 With people running away, officers moved in, service weapons drawn. They put the 26-year-old in handcuffs and confiscated his gun. Tussey was later charged with terroristic threatening, wanton endangerment and disorderly conduct, prosecutors said, and could face up to 20 years in prison.

His lawyer says he “was engaged in perfectly legal behavior” in the incident last year, raising a relatively new legal argument in the United States that now stands before the courts to settle.

That’s because Kentucky made it legal in 2019 to carry a gun in public without a permit, joining what is now a majority of states with similar laws.

Louisville prosecutors say it was more than just the gun that led police to detain Tussey. The type of weapon, how he carried it, and where he was headed also mattered. A witness also told officers that Tussey was returning to the bar after a verbal altercation.

After he was detained, Tussey told police he “was returning to shoot” the people he fought with, according to the arrest citation. Those comments came later. Simms argued in court that he had given police no legal reason to take him into custody when they did.

The judge hasn’t been persuaded by that argument so far, saying in a preliminary ruling on evidence that police had other reasons to arrest Tussey at the time. But Simms says he thinks he can convince a jury that Tussey didn’t commit any crimes, in part because of Kentucky’s new law. His next hearing is Nov. 2.

Earlier this year, Republican Gov. Eric Holcomb signed an Indiana law removing the permit requirement for carrying a handgun in public even though Indiana’s state police superintendent had weighed in against it. The new law took effect July 1.

Under the new law, Galaviz said, officers can’t immediately grab a gun or ask to see a permit when they pull someone over.