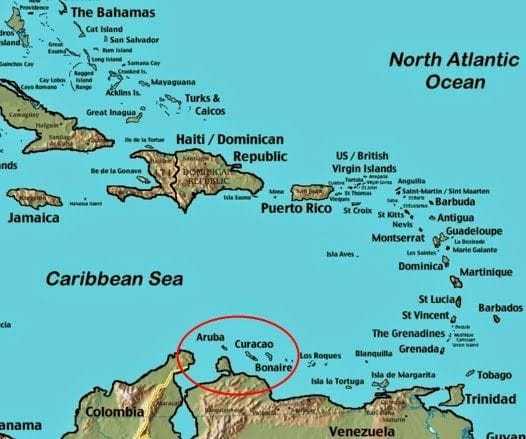 Papiamento, Creole language of ABC (Aruba, Bonaire and Curacao) is from the Cape Verdean Creole family (Cape Verdean language) and was taken to the Caribbean in the 9th century by the Cape Verdeans of that time (linings and slaves), experts in cane culture and sugar production, and who were hired by Jewish entrepreneurs who went to invest in this business in the Caribbean. Cape Verdeans taught this pre-industrial revolution technology (planting cane and producing sugar, which they had learned from Madeirans) to slaves from other African regions, and did so in their language, Cape Verde Creole (Cape Verdean language) , hence the language implanted in Aruba, Bonaire and Curacao.

Unlike many interesting stories, wanting to link Papiamento directly to Portuguese, Galician or Castilian (see Papiamento, on Wikipedia – Portuguese version and Spanish version, where the Portuguese and Spanish, each claim the direct origin of Papiamento), in fact, this is not true. Papiamento is not direct from Portuguese, Galician or Castilian, it is from the Cape Verde Creole family (Cape Verdean language). You can see this best when it’s saying obscene words and offending someone, precisely as they say today in both ABC and Cape Verde islands. The obscene words kept the original, had no lexical influence either from Castilian or Dutch. Also the Papi Cristang of Malacca, the Patuá of Macau, and several creoles from the east (from Daman, Sri Lanka, Myanmar, Philippines, Indonesia) and Africa (Casamança, Guinea Bissau, Sierra Leone and Nigeria, these last two releases to the English), all originated in the Creole of Cabo Verde (Cape Verdean language), which was the French language spoken in Portuguese feitories on the coast of Africa (from Senegal to Sierra Leone), and which was taken east by the thousands of cable – Verdeans (linings and slaves, already Christianized and speaking Creole) who served as sailors and “slaves of arms′′ in Portuguese caravels, demanding the east. I don’t know why the official history of Portugal usually omits this fact, which is in the chronicles of the quinrentist chroniclers, but which we never saw in the history of Portugal that we study from primary education to higher education. However, it has always been tried to deceive us, in colonial time, that we were descendants of Viriato (Iberian hero in the fight against the Romans) and the pastors of the Hermini Mountains, but not much speaking of our black-African ancestry.

We Cape Verdeans understand each other very well with these Antillans and Easterns, whose language is from the same Creole family of Cape Verde (Cape Verdean language), speaking their Creole and we ours. Therefore, Papiamento, Papi Cristang, Patuá Macaense and the creoles, said of Portuguese origin, Daman, India, Sri Lanka, Myanmar, some locations in the Philippines and some places in Indonesia, are creoles of the language family Cape Verde Creole (Cape Verdean language) and indirectly the Galaico-Duriense or Galaico-Portuguese, a language that the people spoke in Portugal in the 6th and 7th century.