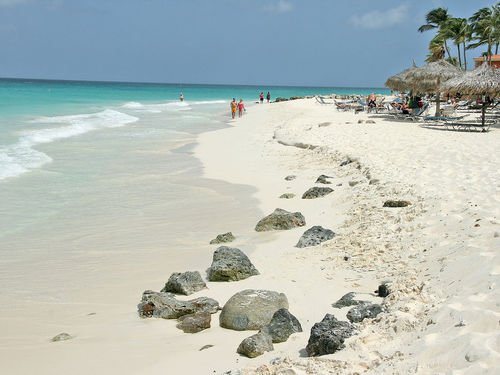 ORANJESTAD — With the recent announcement of the development of an All Inclusive 900 rooms resort at San Nicolas (SN), I have taken some time to reflect what this development would signify for the other side of the island and Aruba. In this context we should be aware that there are another 3000 additional hotel rooms in the pipe-line which may materialize. San Nicolas has become a bit of a ghost town now that the refinery is closed and it is not my intention to deny tourism development at the other side of the island, yet what would this mean for Aruba’s quality of life? There are multiple facts in that lead me to believe that this mega development is not a good idea!

Many of these motives not to enter another mega development are well known: a report of the Central Bank of Aruba, the density of the population per square kilometer (one of the highest in the world), our infra-structure which can not carry another major influx of foreign labor. Classes exceeding 30 students, lack of schools, traffic, foreign exchange flight of capital and the not-so-impressive spin-off as a result of this development. All of this together in my modest opinion do not justify this major development in a beautiful nature area that would go lost. Other considerations:

1.      The investment is not impressive using the rule of thumb of the average investment per developed room: $1 in ADR per $1000 in value per room. The investment of $120,000,000 (All Inclusive) could hardly be compared to a high end/ low impact project. Consequently, I doubt if it would bring more restaurants to establish in SN, let alone the restaurants in SN to see many customers based on the All-Inclusive component.

2.      A few years ago, economist Dr. Arjen Alberts published his report on the development of tourism in St. Maarten and Aruba. His conclusions:” The fact that each year more tourists are coming to Aruba does not signify that the prosperity is on the rise”. To the contrary, the average prosperity has been the same during the last 25 years.

3.      The cake indeed grew but was to be divided in more slices! According to Alberts: “It is even possible that our prosperity may even be reduced in future or stays the same. The bottle neck is the lack of space. The island is filling up. We ran hard but did not advance!”.

4.      Dr. Alberts emphasized that we should be stressing on the experience of the tourist: “Less tourists who spend more”.

5.      In 2003/04 Professor Sam Cole and Victoria Razak were engaged in a study for the island “Framework for Sustainable Tourism for Aruba”. The study stresses the importance of small and boutique development divided over all districts of Aruba. He study has been ignored by every Government these past 15 years. Each consecutive government preferred More is Better instead Less is More!

6.      It is ironic that the local population did take Cole’s report to heart: vacation homes mushroomed all over the island. Apartment and residences are offered at different plat forms (not always cheap) like HomeAway, vrbo.com and airbandb.

7.      This development does offer the low impact Cole suggested and does offer employment to housekeeping, pool maintenance, general and of course the utilities companies. Breckenridge in Colorado thrives on vacation homes and through a simple registration the local administration receives her fair share in taxes. Tourists staying at vacation homes a few years ago already compassed about 30% of total accommodations. This does give us a clear indication that today’s tourist is looking for other accommodations and may not be interested in another mega development. Did we ask them?

8.      Aruba would benefit in consolidating and improving her product. Alberts, Cole and Razak already indicated: LESS TOURISTS SPENDING MORE! Studies within the Aruba Tourism Authority are clear and indicate that we dropped in the (perception) of value for money. Developing 90 high end/ low impact rooms each year would pay off, yet 900 rooms in one development does not reflect great vision! Aruba counts with several development among others: Acqua (500 rooms), Embassy Suites (330 kamers), St. Regis (250), the Airport Hotel, and several condos and with those openings this and next year we could pause, take inventory, prepare for the labor influx and take it from there.  Other questions:

1.      Whom will replace the staff, the old loyal local guard, that soon will retire?

2.      How interested is the younger local generation in the functions that soon will be required in substantial quantities: dishwasher, busboy and waiter?

3.      Despite the unemployment among our younger population, the industry is currently experiencing shortages of labor. The younger generation is not highly motivated to work evenings, weekend and holidays. Current and future developments would only put pressure on the limited availability to fill the many line functions the industry is requiring.

4.      Mention has been made of starting educational programs. How will we stimulate students and graduates to enter a labor market that for the grand majority demands working evenings, weekends and holidays?

6.      What would the spin-off be of more stores establishing in SN?

Unfortunately, there has been no dialogue with the social partners until this project was presented. In this light I envy Switzerland that thru its democratic system conducts referendums 4 times a year. It seems that after our vote is cast in the elections our opinion ceases to exist. Consequently, this project came as a total surprise and San Nicolas IMHO deserves better! SN would benefit of boutique projects like Paradera Park, Boardwalk Hotel, Bucuti/Tara, Manchebo, Amsterdam Manor and Ocean Z just to name a few. Savaneta for example already counts a few boutique developments where the visitors have direct contact with the owner and employees and mother nature. This week I spoke to Samia who changed Palm Beach for Savaneta. Her reaction: ” What is wrong with these people”? It is proper to remark that Samia is a steady guest at Baby and Rodgers Beach and several restaurants in the SN area.

The consequences of the hotel and condo development over the last 15 years are noticeable for every one visiting and living on this island. Traffic, school classes and our experiences are not comparable to ours or our parents quality of life. I envision my grandson asking me one day, “Opa, tell me about the natural pool” and I would answer, “yes, once it was a great please to visit but now it is part of a hotel development”. And, “Opa tell me about Baby and Rodgers Beach”. And what are we going to answer? That we watched from the side lines when this development was presented…and that we thrusted our political leaders to know better and have good intentions!

I could be wrong, reason I am asking my former colleagues of the Aruba Tourism Authority Michael Kuiperi, Rory Arends, Remigio Wever, Mirto Granadillo, Charlie Ybarra, en Myrna Jansen to share their opinion with us.