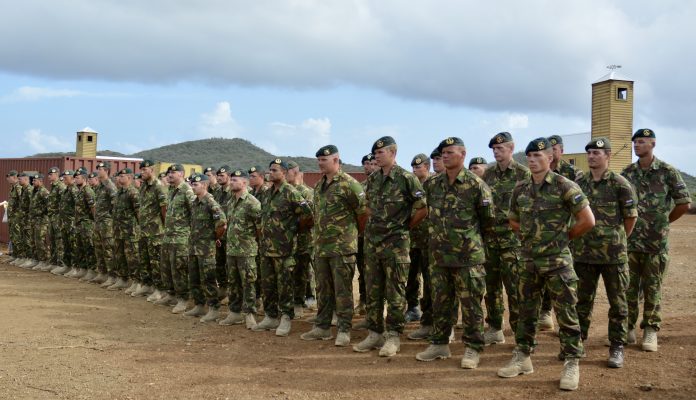 A military ceremony on Wacawa, Curacao was held to open two new Caribbean Defense training facilities. In Aruba, as well as Curacao a training facility has been created where so-called military operations urban terrain [MOUT] can also be practiced.

These training stations were built in less than three weeks by Engineering Company 105 of the Army in the Caribbean Pontonnier exercise. By means of two keys, the company commander of the building unit, Major Koen van Dinter, has handed over the new training locations to the Naval Commander in the Caribbean, Brigadier General of the Marines Peter Jan de Vin.

In Curacao, the new practice location on Wacawa is named after the recently deceased World War II, war veteran Rudy Dovale, who is of Curaçao descent. In the presence of the U.S. Consul Greenberg, Brigadier General Smits, Commander of 11TH Air Mobile Brigade, the engineers who built the site and other invitees, the Naval Commander in the Caribbean unveiled the ‘Camp Dovale’ nameplate and the memorial stone, together with the Dovale family. After a word of thanks from Christie Dovale, Rudy Dovale’s daughter, the soldiers of the army in the West gave a demonstration of the new facility. The new road to the training location is called Kaya Major TijsKoks and is named after the soldier who made the Caribbean Pontonnier exercise of Company 105 Hydraulic Engineering possible.

How We Can Move On