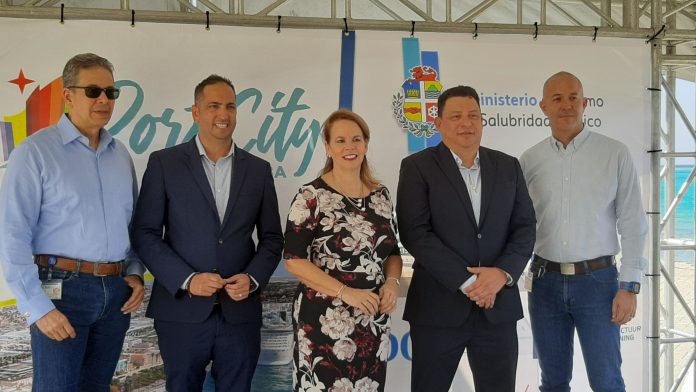 Tuesday morning, prime minister of Aruba, Evelyn Wever-Croes together with minister of Tourism, Dangui Oduber and director of Aruba Ports Authority N.V. (APA), Mark Figaroa announced the opening of the Port City Aruba project, that according to them, will benefit the local community with around three thousand jobs.

The prime minister expressed that the government is very happy to announce this project, which they consider important for Aruba. “An announcement with an extremely large economic impact for our country, an impact which will have positive effects for our entire community”, she said

On the path to economic recovery, where Aruba has been overcoming the challenges left behind by the Covid-19 pandemic, it can be anticipated that by the end of this year and beginning of 2023, Aruba’s economy can reach the level of tourism from before the pandemic, and finances can achieve a surplus once more, like before the pandemic, the premier assured. She said the key to achieve this an more is the diversifying of the economic pillar, which is tourism, and for this, this project has been in preparation for a long time, since 1995.

Minister of Tourism, Dangui Oduber expressed that the process to begin a public tender for this project will start this year, and according to their plans, the project itself will begin in the second trimester of 2023. “It is a project that is meant to be different than all other projects known in Aruba”, he said.

The Port City project is to create a beautiful area with high value, that is attractive for development by the sea, and this is the reason, according to the minister, why for many years this and other governments, during the last two decades, sat together with all stakeholders on the island to think, after market consultations to see where the appetite is to see the development that is necessary for Aruba for the area of Port City.

According to minister Oduber, it was back in 2017 when the first Wever-Croes cabinet put this project as a priority, because they knew what the impact would be on the economy, labor and public finances. In 2018 they presented the concept of the project to the Council of Ministers and received the approval to continue developing the area.

At the start of the second Wever-Croes cabinet in coalition with Raiz party, taking into consideration the new coalition partner, and together with APA they had a presentation of the project in order to receive approval of the new constellation of Council of Ministers, in order to continue the work that began in 2017.

To do this, they implemented a project team where all the land that belonged to the Country of Aruba had to be transferred to Aruba Ports Authority N.V., which had to prepare the parcel and the business plan in order to measure the economic and financial impact for APA, and had to prepare a design of what the project would become.

After this, they held market consultations in order to explore the market and see if the future of the development matched the project in the area. Finally, they set up a new real estate company, under APA, to manage this project.

Right now they are in the final phase, where they have begun preparing all the necessary documents for a public tender, which they hope will take place this year.

They took into consideration what is important in the first phase, which will be from Bushiri to the roundabout by Wendy’s on L. G. Smith Boulevard. They consider that this project must become a ‘MIX’, where most of the area that is to be developed will be destined for public areas that can be used by the community.

For this reason, they thought of seven elements: the first is that Port City has to serve as a gateway, the first impression when tourists arrive at the port. It must also serve as a park where the tourists and the locals meet each other. This is a unique opportunity to develop this whole area, and it will include a boardwalk in the future which will connect the cruise terminal with Bushiri Beach. The experience of water and park must be central in the design, taking into account sustainability and circular economy.

Of the 187,000 square meters available in the area for development, only 43 percent will actually be developed into a Boutique Hotel, Condos, housing, retail and food and beverage; the rest will be destined to public areas with lots of vegetation.

The whole project will take about 15 to 20 years, and right now they will begin with the first phase, where 40 percent of the project needs to be paid by the developer who wins the public tender, and the income generated will be invested by APA in the area.

The project is an investment of almost one billion florins from the public sector, and the income generated will be invested back into maintenance. When the project is operational, it will have an economic contribution of around 4.5 percent to Aruba’s economy, and per year, it is expected to generate 40 million florins for the government.

The businessplan when the project is completed contains three thousand jobs, according to minister Oduber.

Director of APA, Mark Figaroa commented that currently they are in a modernization process, changing the structure from an operational to a commercial company, and right now, they depend mainly on income from cruise tourism and shipping. “These are the only two main sources of income on which APA depends, and based on this, we are looking for ways to begin diversifying and creating other sources of income for APA. I believe that Port City is one of the projects that will help us reach our goals”, he said.