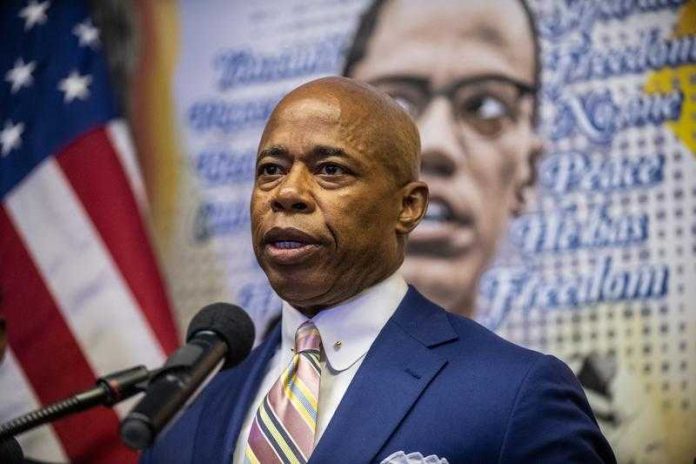 NEW YORK (AP) — Eric Adams will take his oath of office in the wee hours of New Year’s Day to become only the second Black mayor of the nation’s largest city.

New York’s mayor-elect announced on Wednesday that he would hold his swearing-in ceremony at Times Square on Saturday, shortly after midnight, right after the traditional ball drop and amid thousands of New Year’s Eve revelers.

“I am deeply humbled to officially take the oath of office at this iconic occasion, and to participate in the transfer of leadership that is a cornerstone of our democracy,” the former New York police captain said in a statement.

Adams will become the city’s 110th mayor and helm a city of 8.8 million people who had been led for the past eight years by fellow Democrat Bill de Blasio.

“Times Square has long been synonymous with the New Year — a place of excitement, renewal, and hope for the future,” Adams said. “These are the same themes that animated my campaign and will inform my mayoralty, as I prepare to lead the city out of this challenging period.”

The pandemic cast uncertainty over his inauguration earlier this month, as infection rates surged.

He had hoped to hold his inauguration in at Kings Theater in his home borough of Brooklyn, but scuttled those plans because of the quickly spreading omicron variant. In recent days, New York has posted record numbers of infections. A spokesperson said inauguration plans are still pending.

De Blasio took his first oath of office at his Brooklyn home a couple minutes after the stroke of midnight on New Year’s Day in 2014. It was followed later by a public ceremony on the steps of City Hall.

The choice of Times Square might be an unusual one, but not unprecedented.

Michael Bloomberg also took his oath of office in Times Square in the early minutes of 2002, a very public setting following the terrorist attacks at the World Trade Center on Sept. 11, 2001. The symbolic event was a first for Times Square.

During the pandemic, Times Square became a worldwide symbol for the city’s economic downturn, as businesses and the city’s Theater District fell on hard times.

As tourism and businesses recover, it has become a symbol of the city’s resiliency — which appears to not have been lost on the incoming mayor.

Adams’s ascendency to the mayor’s office was assured this summer when he emerged from a crowded Democratic field — in a city where Democrats outnumber Republicans 7 to 1 — after striking a balance between his law enforcement career and his humble beginnings as the son of a single mother who cleaned houses and raised six children.

Seniors get diplomas on racetracks, chairlifts amid virus