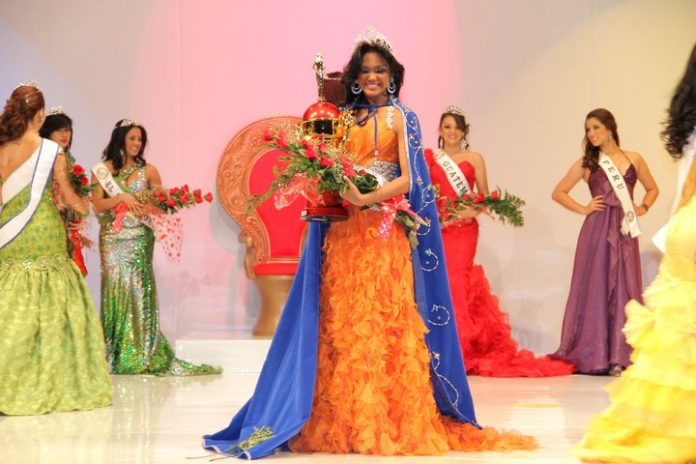 Noelia Khalil is only 28 years old, and she is a professional doctor working at the hospital in Aruba as a ward doctor. She grew up as a dancer, and then entered the world of beauty. During a conversation with our reporter, she told us about her experience in the world of beauty, as well as working at the hospital during the pandemic, and her nomination and triumph in the campaign Unsung Front line Heroes. 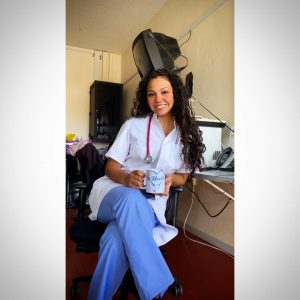 Noelia studied medicine in Costa Rica. After six years she graduated as medical doctor and she came back to Aruba and started working as ward doctor in January 2020, right when the Covid-19 pandemic started.
She says that at the beginning of the pandemic work was really hard. She didn’t know what to expect because worldwide it was something new and unknown. By the fourth wave at the end 2021, even though she knew what to expect, she says the wave hit a lot harder.

“At the beginning we were not prepared for it, and it made it hectic, particularly with the amount of patients that was coming in. It was always hard; we had three waves before it went down a little bit, and when it came back with the fourth wave, I can say it was a lot harder. And this considering that we were ready for it, we knew what to expect from the earlier waves that we had from the year before. Even so it was a lot harder”, she told us.

During the pandemic, CIBC First Caribbean Bank started an initiative in the Caribbean, ‘FirstCaribbean Unsung Frontline Heroes’. This initiative allowed friends and family members nominate a person working as a frontliner during the pandemic. A variety of people was nominated, like police officers, nurses and ambulance personnel, among others. From all the nominations, each island chose three heroes, and Noelia was in the top three from Aruba. From the three nominees a story was published and everyone was allowed to vote, and it was this way that Noelia won first place.

“We know how hard we worked, all that we sacrificed, how tired we were. And what I find the prettiest from this initiative is that it’s not only the person who won who gets a prize, but the other nominees also received a prize, and I found that super pretty. Because all frontliners worked and there can’t only be one reward”, Noelia said.

Ever since she was about 8 or 9 years old, Noelia participated in dance groups. From the world of dance she transitioned to the world of beauty, and the first pageant in which she participated was Miss Teen Aruba International. “My dance friends convinced my mom to sign me up, and that was really great, I liked what the world of beauty is, which is not only beauty because you really learn so much”, she explained. “It is a development in the personal, social… in every aspect, and I really like that a lot.”

Noelia managed to win the main title in Aruba, and after that she went to El Salvador, where she represented Aruba in the pageant Miss Teen Americas. There she also won the main title. After this, Noelia didn’t compete in beauty pageants anymore, because she went to continue studying in Costa Rica.

She says she likes the world of beauty pageants because ‘you have the opportunity to grow in every way. You get to know other cultures, different ways of thinking’. Las year, Noelia participated in a virtual international pageant and was hoping to this year represent Aruba in person at an international pageant.

From a young age, Noelia knew she wanted to study in the field of medicine. For her, everything started with a television show, which inspired her. “When I was in 5th grade, the program Dr. 90210, about plastic surgery, is what inspired me to go into medicine. My entire career, during my five years in Colegio Arubano (high school) and my first five years in Costa Rica, I had the mentality that I would become a plastic surgeon, or reconstructive surgeon, who helps patients who because of disease or any accident need to reconstruct part of their bodies”, she said. “But when I arrived at the part of surgery, I realized that surgery is not for me. At that moment I changed my mind. But I always knew I wanted to be a doctor.”

Summary of the Monthly Bulletin of May 2019: Net Foreign Assets...