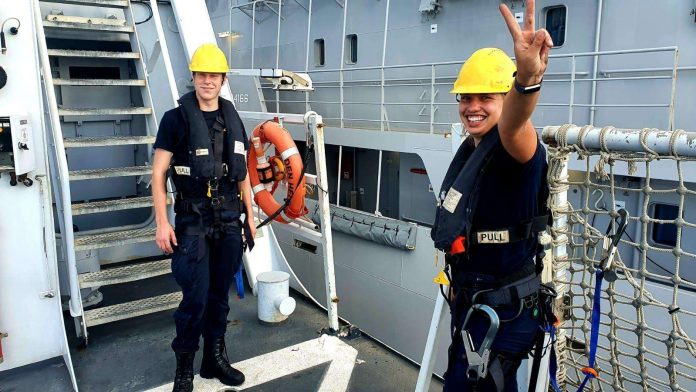 The station ship Zr.Ms. Groningen, has resumed operations in the Caribbean. As a precaution, the ship had her crew in isolation for some time following a COVID-19 contamination. The GGD Curaçao has tested the entire crew of the ship for COVID-19 and found no new positive cases.

The station ship is conducting Defense patrols in the Caribbean. She also sails patrols for the Coast Guard in the Caribbean and the ship can be deployed in (hurricane) emergency relief. Hr. Ms Groningen also has an NH-90 helicopter on board for her broad range of duties. This makes it possible to patrol not only from the sea, but also from the air, in order to prevent illegal (drug) transports or to recognize possible landings of undocumented migrants in a timely manner. The crew member who was diagnosed with COVID-19 some time ago and who prompted Defense to isolate the crew as a precaution is doing well.

Defense on Aruba is the responsibility of the Kingdom of the Netherlands. The Netherlands Military forces that protect Aruba include the Royal Netherlands Navy, the Netherlands Marine Corps and the Netherlands Coastguard. There is also a small indigenous “ArubaanseMilitie” (ARUMIL) of about platoon strength. All forces are stationed at Marines Barracks Savaneta.

“Building Back Better: Toward a Disability-Inclusive, Accessible and Sustainable post COVID-19 Aruba”

‘Dinner under the Stars’ at Manchebo Beach Resort & Spa: Unforgettable, that’s what you are!

Creating a new normal for the future