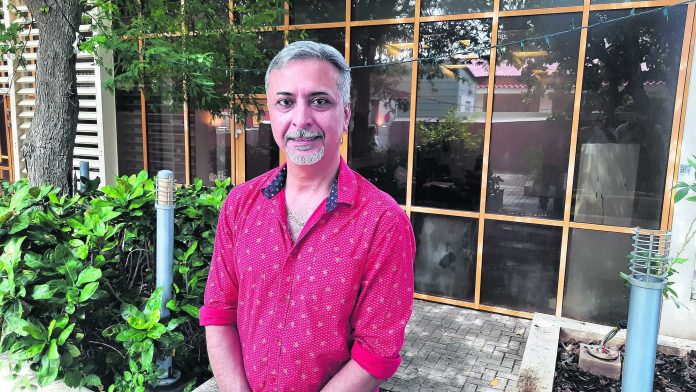 Yesterday, 15th of September, the National Archeological Museum of Aruba began its series of talks which will become a series in order to provide information regarding our sub aquatic cultural archeological heritage. This was very well received among the local community.

Various people and organizations joined this talk, which was very interesting, revealing the beginning of a series of information that will be given to our local community with great value for the development of our culture. Drs. Raymundo Dijkhoff, chief of the investigation and collection sector in the National Archeological Museum of Aruba, gave a presentation. He said: “I am very happy that the reception was so positive and that the interest is great.” He added that by the end of the presentation there were a lot of questions and comments, which means that they could go for a longer time. This was simply a teaser of what’s to come. “There’s a lot more information”, Mr. Dijkhoff said. “For me it was very nice to see the feeling among the public, it was very positive.”

Gendra Lacle, a Master Degree student, gave the first part of the talk about what is currently being studied in the sub aquatic realm. Next year Lacle will be graduating and thus Aruba will have its own sub aquatic archeologist. Next month there will be another talk that will be about research that was carried out in November, when 27 sub aquatic sites were found, and will explain more about this so that everyone understands that we need to contribute together to the greatest cause.

“Once you see how much Aruba has to tell about the past and the wealth that we have, I am sure that little by little it will be magnified. There will be a lot more lectures. But for this year, we are waiting for the ratification of the treaty of UNESCO 2001, that is on its way after October, then we will take our next steps publicly”, Mr. Dijkhoff said.

Aruba National Park Foundation is taking part as one of the stakeholders in maritime archeology that the archeological museum is organizing and trying to gather information from it.

Norman Kuiper, interim director of Aruba National Park Foundation told our reporter that he thinks it’s very beautiful that many people came to this presentation. “This is helping to bring awareness to people regarding what is involved in order to protect our heritage and give a more correct cultural history tomorrow for our students”, he expressed.

A gentleman in the audience was asking where he could find information because he works in the tourism sector and these things add a lot more value to the product Aruba. If this is not well organized, you find yourself with the problem of giving wrong information and this can spread.

During the talk, references were made to the territorial planning policy, ROPv and how this is put together in regards to protection of our natural areas, which goes hand-in-hand with conservation of our culture and heritage as well, with all the work done by the museum and other organizations.
Our reporter asked Mr. Kuiperi about this, and he said he has simply one criticism that he needs to highlight.

The ROPv was ratified in Parliament in 2019, and Mr. Kuiperi says that a part was change where at the end of the day a minister has the right to change the rules in it. “This weakens the ROPv completely.” Mr. Kuiperi adds that the idea is to protect what is out there, and its experts and those who have studied for years who came up with the draft for the policy. “It is regrettable that because it was included that the minister has a right to change a site that is protected in ROPv, for me it completely weakened the ROPv.” This could have been fixed simply by removing this added point. “It was not originally included, so to me, it means that they should have removed it if they want to protect Aruba”, Mr. Kuiperi said.

The next talk will take place on the 27th of October at the National Archeological Museum of Aruba at 7:30pm in the auditorium. The talks are in Papiamento.

Organization, Governance & Management (OGM) program at the University of Aruba:...