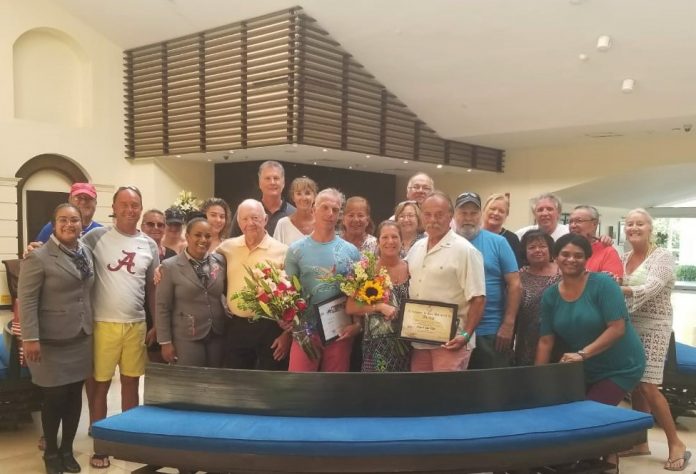 Recently, Aruba Tourism Authority NV representative Marouska Heyliger had the great pleasure in honoring loyal Aruba visitors with their distinctive certificates at the Barcelo Aruba Resort. These certificates are a way to say “Masha Danki” for continuously choosing Aruba as a favorite vacation destination. The titles are as following: 10+ years   “Distinguished Visitor” and 20+ years “Goodwill Ambassador” and 35+ years “Emerald Ambassador”

The honorees were Darren Cook from London honored as Distinguished Visitor. Cook has been visiting the island for 15 consecutive year.

Also honored were Robert and Anna Valenti from Connecticut who have been coming to the island for 20 consecutive years and received the honorary title of Goodwill Ambassadors.

The honorees stated that they love coming back to the island for the friendly people of Barceló, beautiful beaches and fantastic restaurants.

The ceremony which was held at Barcelo Aruba was conducted by Heyliger together with Sandra and Natasha, representatives of the resort. They presented the honorees with some presents and thanked them for choosing Aruba as their home away from home. Friends and families of the honorees also joined this great celebration.